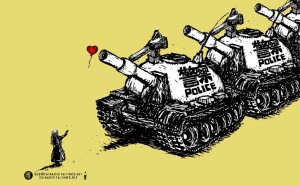 Seven years ago, dissident cartoonist Badiucao fled his home country of China for Australia. He’s long relied on the internet to share his work. “I felt this deepening of free expression, as everyone began to use the internet in a new way, I wanted to join in and be part of it,” he told CNN’s James Griffiths in a recent interview.

Badiucao initially relied on Weibo, China’s heavily-censored Twitter analogue, to share his cartoons, but he stopped using the platform after authorities deleted more than 30 of his accounts. Sophie Beach, editor of China Digital Times describes Badiucao’s experience to Griffiths: “Once the authorities started cracking down on Weibo, they specifically targeted several of these outspoken cartoonists and the environment shrunk for them.” 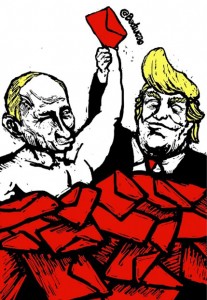 Badiucao has since turned to Twitter to express himself and to circumvent Chinese censorship, using the platform to criticize China’s human rights abuses and corrupt leadership. His scope has widened to include global politics, including U.S. politics.

Badiucao is famously secretive about his identity, going as far as covering his face during public appearances — he has reason to be paranoid. The Chinese government has a long history of abusing and terrorizing dissident artists. Rebel Pepper, who also draws cartoons critical of the Chinese regime, fled China for Japan in 2014. The exile has caused significant financial hardship, and Rebel Pepper isn’t safe — he’s had difficulty renewing his Japanese visa and may eventually be repatriated to China.

The case of two Chinese dissidents who fled to Thailand doesn’t bode well for Rebel Pepper’s future if he is repatriated. Pro-democracy activist Dong Guangping and political cartoonist Jiang Yefei were deported back to China in 2015 despite having been granted refugee status by the United Nations. Both men were taken into custody upon their return and little has been heard from them since. Jiang originally fled to Thailand in 2008 after he was briefly imprisoned and tortured in China for criticizing the government’s response to the Sichuan earthquake.

“Yes, repercussions for family and friends is the most common way for the Chinese Government to throw terror on people like me,” said Badiucao in a 2016 interview with Cartoonists Rights Network International. “They stop your family from going overseas, even children of dissidents... They frame family members and send them to prison in order to bend the will of dissident or purely as a punishment.”

After years overseas, China has revoked Badiucao’s citizenship. He’s become an Australian citizen, and he has thrived in the country, engaing in performance art and recently opening an exhibit of his cartoons and three-dimensional artworks, but “After almost seven years in self-imposed exile in Australia,” writes Griffiths, “more than anything else [Badiucao] fears being cut-off from his homeland, becoming another irrelevant overseas critic fighting yesterday’s battles.”