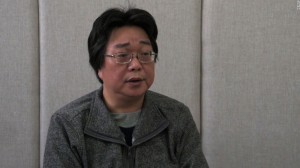 Hong Kong publisher Gui Minhai, who has been held in an undisclosed location in mainland China since October 2015 as authorities try to extract information about his customers, has been awarded the Swedish Publicists’ Association’s Anna Politkovskaya Memorial Prize for free speech and press freedom. Gui, a naturalized Swedish citizen, was detained along with four other men associated with Mighty Current Press; all of his colleagues were released by late June 2016.

Gui was “escorted” into detention from his vacation home in Thailand, an ominous signal of Chinese authorities’ reach across borders. His daughter Angela Gui keeps his case in the international spotlight via her Twitter account, the website FreeGuiMinhai.org, and a Facebook page also called Free Gui Minhai. Accepting the award on her father’s behalf, Angela Gui said she hoped that “more attention…can lead to more information on his situation and health and that (he) will be treated better.”

Four of the detainees including Gui appeared on Chinese TV in February 2016 to confess to “illegal trading” of banned books, and to say that they had come to the mainland voluntarily. After one of the other men, Lam Wing Kee, was released last June, he confirmed what many had suspected: the confession “was a show, and I accepted it. [Chinese authorities] gave me the script. I had to follow the script. If I did not follow it strictly, they would ask for a retake.”

The Swedish Publicists’ Association said it chose Gui for the prize because he has “despite personal risk … shown great courage as a publisher and challenged the narrow-minded political agenda of the Chinese regime.” The award is named for Anna Politkovskaya, the Russian journalist who was assassinated in Moscow in 2006.

International supporters can find a number of ways to help Gui here at FreeGuiMinhai.org.