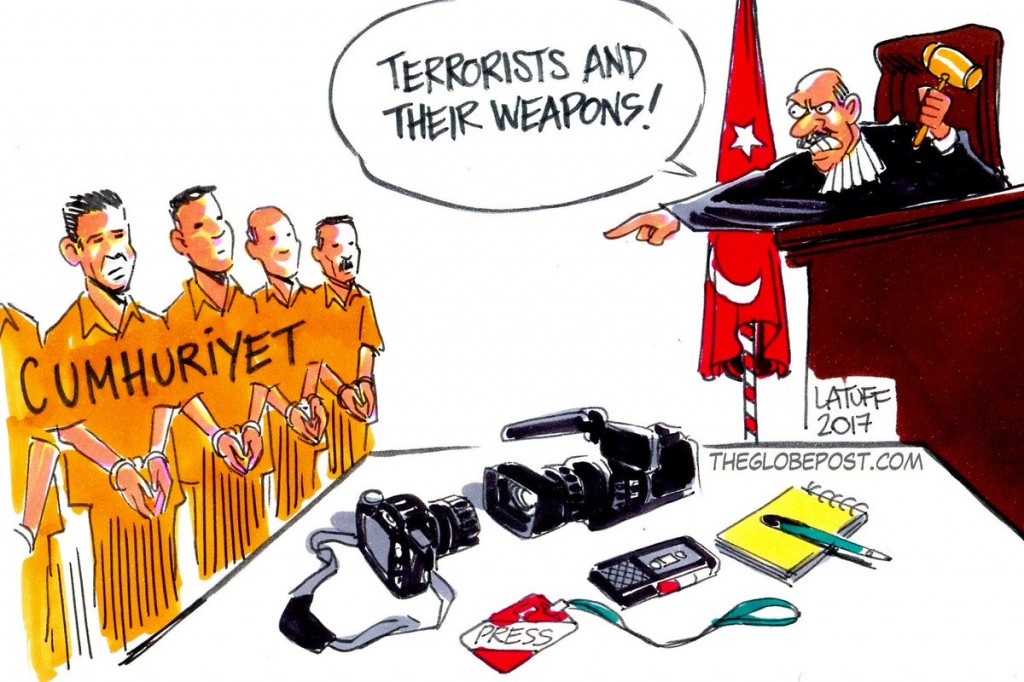 As we continue to await a verdict in the politically-motivated trial of Turkish political cartoonist Musa Kart and 16 of his journalist and editorial colleagues from Cumhuriyet newspaper, fellow cartoonist Carlos Latuff is doing everything he can from his home country of Brazil to keep the world’s attention trained on the free expression crackdown.

Earlier this month, Latuff sat down for an interview with Turkish news website Kronos on the issue, particularly the vital role of political cartoonists and satire in exposing serious issues like corruption and repression. He has taken a keen interest in the situation in Turkey over the past several years, and his worked has attracted enough attention that last year the Turkish government banned his website within the country.

Nevertheless, individuals in Turkey continue to risk their freedom by sharing his cartoons on social media. Last year Kurdish journalist Özgür Paksoy was detained and questioned over a Latuff cartoon, and this past April actor and columnist Orhan Aydin received a suspended sentence of 11 months and 20 days prison for allegedly insulting President Recep Tayyip Erdoğan with another.

If strife were nonexistent, Latuff told Kronos, there would be no need for political cartoonists. He doesn’t foresee that happening anytime soon, however:

A perfect world has no political cartoonists because then we wouldn’t have topics to criticize. The main reason for a political cartoonist to exist are things like war, conflicts, social inequality. I don’t know what a ‘peaceful caricature’ looks like since we never had real peace in the world and I doubt we will ever have.

As Kart himself outlined during his defense in court earlier this year, Latuff also reiterated that “a country where satire and humor are unlawful cannot be considered a democracy.” He adds that the Erdoğan government’s continuing purge of all sorts of free expression, from satirical magazines to children’s cartoons to academic research, is quite simply “dragging Turkey into a dictatorship in broad daylight, before the eyes of the world.”

Check out the full Kronos interview with Latuff here, as well as our past coverage of the arrest and trial of Musa Kart and his Cumhuriyet colleagues below: