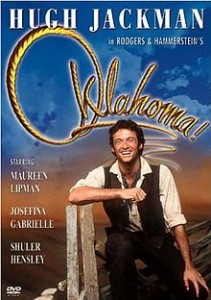 In response to complaints from one set of parents, a Utah school district has acknowledged that about 100 junior high students may have caught a fleeting glimpse of partial nudity while watching a 1999 version of the musical Oklahoma! in late September. In an email to all parents almost two weeks later, the Nebo School District advised that “you may want to visit with your student about this.”

A substitute teacher showed the movie to multiple classes at Payson Junior High on Sept. 28-29 without previewing it in full and clearing it with the building principal, as required by district policy. The scene in which characters Curly and Jud discuss the latter’s collection of pin-up postcards is in the original 1943 script by Oscar Hammerstein, which notably alludes to one model described as “plumb stark naked as a jaybird.”

The 1955 film version demurely hid the postcards from view, but in the 1999 version starring Hugh Jackman they do make a brief appearance–although according to the Salt Lake Tribune “most are obscured or appear to be blurred.”

Nevertheless, the parents of one student out of the estimated 100-150 who viewed the movie pressured the district via social media to send out an after-the-fact parental notification of the technically unauthorized viewing. On October 11, Payson Junior High principal Carl Swenson and drama teacher Carol Gregory sent a joint email to all parents acknowledging that “this movie was not previewed or approved and some inappropriate material was viewed by the students.”

A district spokeswoman says that “administrators have reviewed the media policy with the teacher”–presumably the substitute who actually showed the movie, not Gregory. If so, that means the teacher is at least more fortunate than a Columbus, Ohio substitute who in 2015 was convicted on four felony counts of “disseminating matter harmful to juveniles” after showing the horror anthology film The ABCs of Death to five high school Spanish classes because it was partly in Spanish. The teacher, Sheila Kearns, was sentenced to 90 days in jail and three years of probation.