The specious charges of counterfeiting and forgery against political cartoonist Nsé Ramón Esono Ebalé were dropped today. The case was seen in Equatorial Guinea’s capital Malabo, where Ebalé has been imprisoned since September 16, 2017. He is scheduled to be released in two days.

Before his arrest, Nsé Ramón Esono Ebalé was living in Paraguay working under the pen name Jamón y Queso (Ham & Cheese). He created stand alone political cartoons critical of his home government Equatorial Guinea, and a Kickstarter funded graphic novel, La Pesadilla de Obi (Obi’s Nightmare), that explored what their leader, Teodoro Obiang Nguema Mbasogo, would be like if he woke up without access to “education, electricity, healthcare, sanitation, free speech, or the estimated $700M+ in oil payments that he hold’s in American banks” — or to put it another way, he woke up to discover he was one of his own citizens. 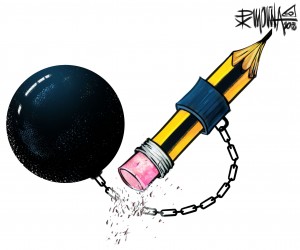 Obiang is the second longest serving (non-royal) national leader in the world, having come to power in 1979, after a violent military coup d’état, where he removed his (possibly insane) uncle from power. Under Obiang’s rule, Equatorial Guinea has become the richest, per capita, African country, due to its vast oil production. Predictably, that wealth has not translated to quality of life for the average Equatoguinean, with the country consistently scoring in the worst percentile each year with regards to human right and civil liberties. Obiang is also listed among leaders like Kim Jung Un and The Taliban by Reporters Without Borders as one of their Predators of Press Freedom, a list which attempts to measure both direct pressure a ruler places on the press as well as indirect sources of force and coercion.

Ebalé had returned to Equatorial Guinea to get a new passport, having destroyed his in 2012, in a public video on YouTube. He was arrested with two Spanish friends he was traveling with, though they were both released after extensive questioning regarding Elbalé’s artwork. Despite his lack of passport, the police claimed they had trailed Ebalé on multiple trips to the country since 2014. According to Cartoonists Rights Network International:

The charge sheet alleges that an undercover agent, working on a tip, approached Esono Ebalé to provide change for a large bill and was given counterfeit money in return. The charge sheet also states that the head of the National Police testified regarding receiving information about Esono Ebalé’s alleged involvement in counterfeiting money and that the false notes were presented to the judge. It includes no information as to where the police found the money or other alleged members of the counterfeit ring. The judge refused bail and ordered Esono Ebalé to pay a 20 million CFA francs (US$36,000) assurance to satisfy any fines the court may levy on him.

Groups like EGJustice, Cartoonists Rights Network International, and African Commission on Human and Peoples’ Rights had appealed to the United Nations and the Government of Equatorial Guinea to release Nsé Ramón Esono Ebalé seemingly without avail, leaving this matter to the Equatoguinean courts. The case had been closely followed internationally with the hope that constant pressure from the press and from the people would help ensure a fair trial, though it was by no means a guarantee of one. There is little doubt that the scrutiny, both global and local, helped secure Ebalé’s liberty.