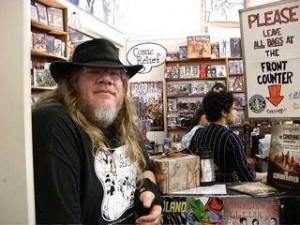 Ten years gone, and not only do I still miss Rory Root, but I often reflect that comics has never recovered from his loss.

Rory was a true nexus, encouraging creators, retailers, publishers, and educators not only to interact with each other, but to befriend each other. He believed in the medium, and its capacity to speak to everyone. He wouldn’t have been surprised by today’s world of graphic novels being on every bookshelf and comics ideas being on every screen. He wouldn’t have lorded it over you that he was here first either. He’d have said, “Welcome to the fold. Here, buy this book you’ve never heard of — you’ll like it and you’ll thank me later.”

Rory believed in comics as books, a notion that seems trite now, but was radical when he began his business. He championed the small press, giving many creators their first exposure to readers, while also introducing many newer members of our field to established peers. He didn’t subscribe to divisions. A New York publisher had as much right to sit at the table as a superhero house, as a small press, as a self-publisher, as a zine maker, and every creator was welcome there, too, just as long as we all showed respect for each other.

Rory epitomized the belief that we’re all in this together. I recall him saying something like, “If I’m selling your book, I should understand what you do, and you should understand what I do.” Likewise, if you were an artist, you should know the marketing assistant at your publisher and what they do. If you were a retailer, you should have a relationship with the staff of your local library. And ideally, you should get to know each other in a human way, not a transactional one. Rory lived this ethic by being generous with his time, contacts, and knowledge, and would share his perspective just as freely with a smart 17 year old trying to break in as he would with the chief executive of a major publishing house. I know – I was that 17 year old, and I know I wasn’t the only one.

The space outside the convention center where Rory smoked cigarettes WAS the convention; it was the point of convergence, and it was his warmth and passion that brought us together. It has never been matched. As comics, like the rest of the world, becomes more tribal, and as various parts of our field become more insulated from the rest, we could use a Rory Root to help knit us together.

Those who remember him fondly, as I do, let’s recall his example, and bring what we admire of his energy into our dealings with each other in the immediate months ahead. We need to understand each other, and to befriend each other. The fact that we get to work in comics is almost a miracle – it’s one of those passion job industries full of people who care about their work. Let’s honor that, as Rory did. Reach out to someone who works across the field from you, and receive such outreach warmly. Introduce your friends to your colleagues. Let’s remember Rory’s true legacy – as a connector and booster for the field – by doing some connecting and boosting of our own.
Rory believed in comics as a community. Let’s honor him by bringing that ethic into our work in 2018.

Rory Root owned and operated the extraordinary Comic Relief, in Berkeley, California.  He received the Will Eisner Spirit of Retailing Award in 1993 for his commitment to promoting the genre. He passed away on May 19, 2008, and will forever be remembered as a legend and a friend to many in the comic book world.

Charles Brownstein is the Executive Director of Comic Book Legal Defense Fund. His work at CBLDF includes development of the organization’s program, fundraising, and administrative work. Beyond CBLDF he is prolific and sought out writer, lecturer, and curator whose work has reached audiences all over the world. His publications include Eisner/Miller, and he has been featured in documentaries including Robert Kirkman’s Secret History of Comics. Most recently, he co-curated The Art of March: A Civil Rights with John Lind, which is on view at the Society of Illustrators in New York City until June 30.