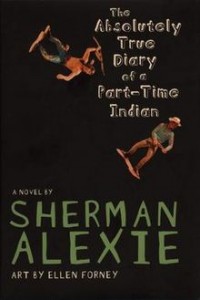 According to The Emporia Gazette, Austin Schopper, an English teacher at Waverly High School in Kansas was suspended right before Banned Books Week, for suggesting The Absolutely True Diary of a Part-Time Indian as an addition to his curriculum. The suspension is set to last nine days and will begin on September 11th.

Schopper told the Gazette, “I can’t talk about a lot of the specifics about what happened. It’s under the advice of our union rep to not push the school’s buttons anymore.”

While the way the school is handling this seems unorthodox, the book in question is one of the most frequently challenged books. According to the American Library Association, The Absolutely True Diary of a Part-Time Indian by Sherman Alexie, was the second most frequently challenged book in 2017. That same year, CBLDF defended Sherman’s partially illustrated memoir in four different challenges around the country.

While Schopper wouldn’t talk about the District’s decision to suspend him over the parents complaints about the assignment, he made it clear that he didn’t blame the school, that he understood they were looking for a compromise that would make everyone happy. Instead he talked to the Gazette about an article by Sherman Alexie that he felt was relevant to the situation,

“[Alexie] talked about, if our goal is to educate students and to teach them the value of literature, then we need to speak to them where they’re at. We can’t pretend like the issues that our students already go through don’t exist. I can’t imagine that there’s a class that doesn’t have a family member that struggles with addiction or mental health or … poverty.”

Schopper also said those issues were what drew him to the book in the first place. He taught it previously at another school, and thought that students would connect with it. Previously he had also taught Me, Earl, and the Dying Girl by Jesse Andrews, which he believes can be considered controversial, and had great success with it.

The superintendent Corey Reese said that he was unable to address this issue in anyway when the Gazette followed up with him.