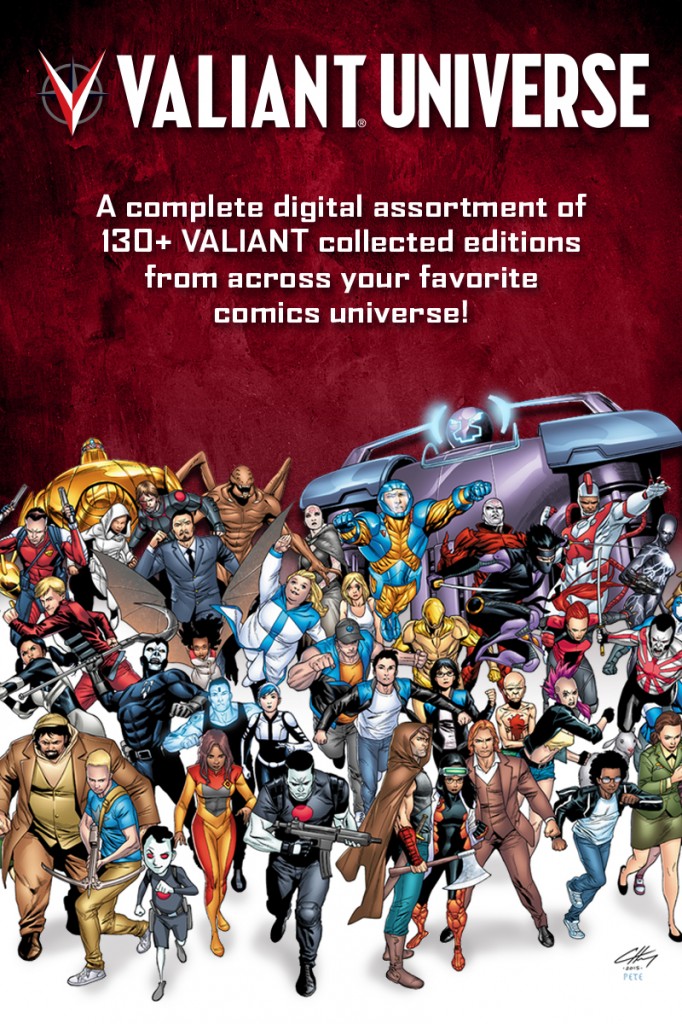 Valiant Entertainment is excited to announce that it has joined forces with Groupees, a unique online and mobile platform for distributing media with real-time social features, for the launch of a brand new, DRM-free, pay-what-you-want digital bundle of Valiant comics – the biggest ever offered in Valiant’s history!

Starting on October 16th, hundreds of Valiant’s critically acclaimed titles – from inspiring creators like Joshua Dysart (Unknown Soldier), Matt Kindt (Grass Kings), Paolo Rivera (Daredevil), Jody Houser (Doctor Who), Robert Gill (Batgirl), Roberto de la Torre (Iron Man), and many more – are available for purchase on the Groupees website for the next two weeks at pay-what-you-want prices! A portion of the proceeds from all sales will support Comic Book Legal Defense Fund, a non-profit organization that protects the First Amendment rights of the people who make, read, sell, and teach comics.

Customers can pay a minimum of $5 or more to unlock the ORIGINS tier of comics which includes Volume 1 trades of Faith, Bloodshot (2018), Harbinger, Unity, and Shadowman (2012), plus The Valiant and Book of Death!

Paying at the $10 ESSENTIALS tier level will unlock another new crop of critically acclaimed first volumes and single issues, including Harbinger Renegade, X-O Manowar (2017), Wrath of the Eternal Warrior, Warrior, The Death-Defying Doctor Mirage, Secret Weapons #0, Harbinger Wars 2: Prelude #1, and more – plus everything unlocked in the ORIGINS tier for a combined retail value of $172!

At the next level, customers can unlock the VALIANT tier for a minimum of $20 and obtain entire runs of Faith, Harbinger, Unity, Wrath of the Eternal Warrior,  and much more – plus everything from the ORIGINS and ESSENTIALS tier, for a combined value of $526!

And then, for $500 at THE UNIVERSE tier, fans can snag a full set of Valiant’s entire digital comic collection – a $1,812 retail value for just over a third of the cost!

The highest contributor to the Groupees Bundle will receive a free VALIANT VIP PASS to New York Comic Con 2019 – including two NYCC badges, preferred seating at all of Valiant’s panel presentations throughout the weekend, a deluxe tour of Valiant Headquarters, and dinner with members of Valiant’s hardworking and talented staff! (Travel and lodging costs are not included.)

PLUS: As more bundles are sold, the campaign will also feature surprise bonus STRETCH GOALS that unlock even more free content for contributors at every single level!

“We are thrilled to be partnering with Valiant Entertainment to offer this amazing deal to comic book fans,” said Thomas Brooke, Founder of Groupees. “We like to think of our bundle promotions as unique celebrations for our community and fans of comics, and this Valiant Universe bundle is a remarkable example and tribute to Valiant’s commitment to giving back to its fans and the industry.”

The Valiant Universe Groupees Bundle will run for two weeks and ends on October 30th, so don’t miss out – head to Groupees.com/valiantuniverse for an amazing lineup of comics!

Valiant Entertainment, a subsidiary of DMG Entertainment, is a leading character-based entertainment company that owns and controls the third largest library of superheroes behind Marvel and DC. With more than 80 million issues sold and a library of over 2,000 characters, including X-O Manowar, Bloodshot, Harbinger, Shadowman, Archer & Armstrong, and many more, Valiant is one of the most successful publishers in the history of the comic book medium. Valiant consistently produces some of the most critically acclaimed comics in the industry and has received numerous industry awards and accolades, including a Diamond Gem Award for Comic Book Publisher of the Year. For more information, visit Valiant on Facebook, Twitter, Tumblr, Instagram, and ValiantEntertainment.com. For Valiant merchandise and more, visit ValiantStore.com.

Groupees is a unique online and mobile platform for distribution of digital media, including games, comics, ebooks and music, with real-time social features so users can share their passions with like-minded people from around the World. Based in Portland, OR, USA, the Groupees team spans continents and includes passionate professionals with backgrounds in games, music, social media and technology.

Comic Book Legal Defense Fund is a non-profit organization protecting the freedom to read comics! Our work protects readers, creators, librarians, retailers, publishers, and educators who face the threat of censorship. We monitor legislation and challenge laws that would limit the First Amendment. We create resources that promote understanding of comics and the rights our community is guaranteed. Every day we publish news and information about censorship events as they happen. We are partners in the Kids’ Right to Read Project and Banned Books Week. Our expert legal team is available at a moment’s notice to respond to First Amendment emergencies. CBLDF is a lean organization that works hard to protect the rights on which our community depends. Please support our important work! http://cbldf.org

← City of Thieves Pulled from Florida High School
Get Ready for Halloween with Hair-Raising Reads Signed by Neil Gaiman, Robert Kirkman, & Many More! →