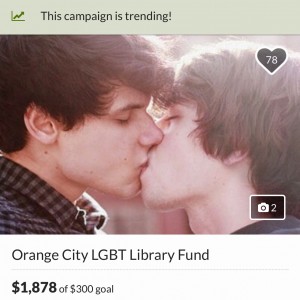 Last Week, CBLDF wrote about a man in Iowa who took out four LGBTQ children’s books from the Orange City Public Library and proceeded to burn them during a Facebook Live video. Since that news story, the library has received book and money donations from people all over the country to show their support of the right to read. The books burned were David Levithan’s Two Boys Kissing, Gayle E. Pitman’s This Day in June, Christine Baldacchino’s Morris Micklewhite and the Tangerine Dress, and Suzanne and Max Lang’s Families, Families, Families!

The man who burned the books is Paul Dorr, a prominent figure of the religious group called Rescuing the Perishing. His religion was at least a partial motivator in his choice to destroy the public library’s property, at one point saying into the camera during his video,

“Continuing my 25-year stand for Christ, I cannot stand by and let the shameful adults at the Orange City library board bring the next group of little children into their foul sexual reality without a firm resistance.”

But people around the country do not agree with Dorr. Multiple copies of the books that were burned have been donated to the library, possibly other LGBTQIA books as well. The library director Amanda Vazquez told Iowa Public Radio, “People must feel pretty strongly about the issue to be contributing the way that they are.”

People have also sent in monetary donations to help replace the books, and a GoFundMe was set up by Dylan Boyle, who wanted to not only replace the books that were burned, but get the library five copies of each one, to make sure that there were plenty of back-ups in case such an incident happened again. Boyle asked for $300 dollars to buy the 20 books and donate them to Orange City Public Library, writing on the fundraising website:

“The Orange City Library strives to ‘enrich a vibrant community by providing a comfortable space for the community to discover their roots, express creativity, and celebrate diversity through literacy, information, and technology.’ Through its mission, the library has included LGBT+ literature, which Mr. Dorr found incredibly offensive because he does not value the First Amendment.

At the time of this article’s writing, Boyle has raised nearly $2000 dollars to help protect intellectual freedom at Orange City Public Library! It’s nice to have great news to report after an upsetting incident like this. What Orange City Library will do with the surplus of books and funds has not been mentioned yet, but hopefully, they’ll continue their great work representing all voices in their community, and protecting their patrons’ right to read.

As for Dorr, until the burned books are overdue by two months, it is unclear whether officials will pursue him for the destruction of public property. Perhaps the wealth of kindness offered to the library in response to his video will teach him that burning books on Facebook Live is pointless. As Dylan Boyle told Iowa Public Radio, “When people want to oppress and intimidate people, there are a lot more people who are willing to stand up.”