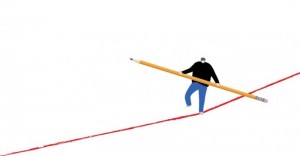 Registration is now open for the free one day symposium Red Lines: Cartooning at Risk in Philadelphia on December 7th. Spend the day listening to political cartoonists like Rob Rogers and censorship experts like Charles Brownstein discuss the current media climate and the future of the medium.

The simple one panel cartoons that greet readers when flipping through the newspaper often speak volumes. Political cartoons reflect on current events and everyday fears, confirm readers own thoughts or offer a different take on a well-trod situations. We as a society take political cartoons for granted, since many assume they are not subversive art, but merely harmless fun. However, around the world and at home, the artists behind them are under attack, both literally and figuratively.

This is the basis for an upcoming symposium in Philadelphia that is open to the public – Red Lines: Cartooning at Risk – presented by The Center for Media Risk, part of The Annenberg School of Communication at University of Pennsylvania. From the invitation:

Cartoons are among the most basic forms of political commentary, but their simplicity also renders them vulnerable to attack. Today’s threats range from direct attacks by governments to self-censorship by publishers and the crossfire of the culture wars. This symposium brings together leading artists and experts to discuss the power and precarity of cartoons in America and around the world.

The Center for Media at Risk aims to foster free thinking, critical practice, and scholarship about the media. They list their goals as amplifying the dialogue between professionals and scholars about a free media; promoting awareness of political intimidation of the media; increasing engagement; building community for all forms of media under threat; supporting likeminded associations and organization worldwide who seek to advocate for the media in the face of intimidation. From their website:

We are in unchartered waters. Political intimidation threatens media practitioners worldwide, and disinformation campaigns destabilize public trust. The Center for Media at Risk offers the chance to strategize in response to threatening political conditions. Knowing how media practitioners work under authoritarian regimes and circumstances of creeping authoritarianism can help free/defend/empower/protect/save the media.

The symposium, which does require registration, has stacked the panels with a lot of amazing speakers. Among them is Comic Book Legal Defense Fund’s Executive Director, Charles Brownstein; Rob Rogers, political cartoonist and ex-Pittsburgh Gazette employee; Mr. Fish aka Dwayne Booth, whose work has appeared in everything from Harper’s to the Village Voice, The Philadelphia Inquirer’s Editorial cartoonist Signe Wilkinson, and many more prestigious creators.

The symposium, which is free to attend, is broken up into two panels: Confronting State Power and Cultural Crossfire, with a break in-between, and a chance to meet the speakers after and get work signed by them. Definitely register now, a day devoted to scholarly discourse on the dangers facing the media today is likely to fill up quickly.