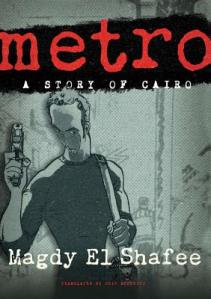 The banning of cartoons and graphic novels by the foreign regimes they criticize is an all-too-common story. So, it is always a welcome change to report a formerly banned work’s re-release. A once-banned graphic novel that criticized Hosni Mubarak’s government is now back on Egyptian bookshelves.

Magdy al-Shafee’s Metro is a noir tale of software developers struggling against a fundamentally corrupt economy and government under Hosni Mubarak’s regime. Published in a limited release in January 2008, it quickly gained notoriety when it was banned by the Egyptian government, and al-Shafee was fined for “infringing upon public decency.” Al-Shaffee vowed at the time to fight both the banning and the fine:

Shafee told Daily News Egypt that he was aware that sections of Metro — which contains limited content of a sexual nature — might offend some readers and that it was for this reason that a ” for adults only” warning was put on the front cover. Shafee added that the comic’s content does not mean that it should be removed from the market.

Arab Literature (In English) now reports that Metro is once again on bookshelves in Cairo. After an English translation from Chip Rosetti was released in June, Arabic graphic novel publisher The Comic Shop republished the work in its original language this past August.

Egyptian censors have not always been kind to cartoonists, even in the wake of the Arab Spring. It is unknown whether the ban on Metro was actually lifted, its being ignored as a remnant of the deposed regime, or the current government isn’t enforcing the ban, but it is a victory for creative free expression that the book is back on shelves and the spotlight is shining on Metro once again.