The CBLDF Team just got back from a hugely successful (and deliriously fun) trip to San Diego for Comic-Con International, but we’re not going to let a little jet-lag stop us from making the premiums we debuted at SDCC 2013 available for your generous donations! If you visit the CBLDF Rewards Zone, you’ll now find the convention smash hit BILL GAINES WAS RIGHT t-shirt; Super Graphic creator Tim Leong’s BANNED COMICS Infographic Poster; and two limited-edition variant covers: Adventure Time #18, with a cover by Chrystin Garland, and the Quantum and Woody #1 CBLDF Liberty Variant, with a cover by Tony Millionaire! 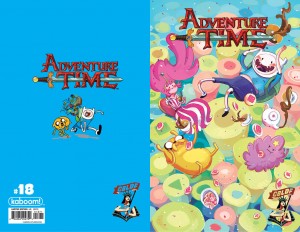 Thanks to series creator Pendleton Ward’s quirky sense of humor and, well, adventure, Adventure Time with Finn and Jake has appealed to a wide range of people since it’s debut on Cartoon Network in 2010. Further cementing its status as one of the best (and increasingly iconic) new franchises of the past few years are the Adventure Time comics published by Boom! Studios’ all-ages KaBoom! imprint. The ongoing series, written by Ryan North (Dinosaur Comics) and illustrated by Braden Lamb and Shelli Paroline, has become a major success in its own right, and it even won an Eisner Award this weekend for Best Publication for Kids (ages 8-12). The CBLDF-exclusive variant of Adventure Time #18 features a gorgeous surreal cover by Chrystin Garland. 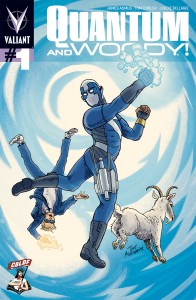 Speaking of covers that you won’t be able to find anywhere else, take a look at the CBLDF Liberty Variant cover for Quantum and Woody #1, drawn by Tony Millionaire. The veteran cartoonist and award-winning creator of Maakies and Sock Monkey rarely ventures into the realm of superheroes, but he made an exception for what Valiant Entertainment affectionately calls “The World’s Worst Superhero Team.” Originally created in 1997 by writer Christopher Priest and artist Mark Bright, the newly relaunched series is written by James Asmus (Gambit) with art by Tom Fowler. The CBLDF Liberty Variant of Quantum and Woody #1 marks the first time Valiant — a recent addition to our roster of Corporate Members — has produced a convention variant. 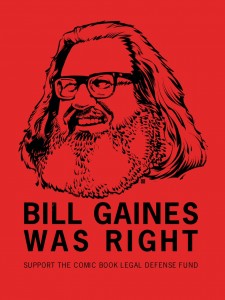 You know what’s not great? CENSORSHIP. That’s what EC Comics and Mad Magazine publisher Bill Gaines argued in his testimony before the Senate Subcommittee on Juvenile Delinquency in 1954, and we here at CBLDF certainly agree. That’s why we’re celebrating one of comics’ greatest champions of free speech with this BILL GAINES WAS RIGHT t-shirt. The affectionate image of Gaines by artist Tony Shasteen is printed on a super-comfy American Apparel shirt. 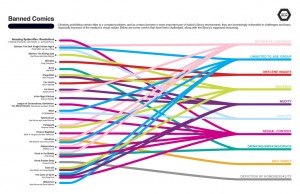 Despite the hard work of CBLDF, comic books are still susceptible to censorship, as this infographic poster by designer Tim Leong shows. Comic books are challenged for a myriad of reasons, and Leong’s poster reveals just how insidious censorship is!

Visit the CBLDF Rewards Zone to pick up these amazing CBLDF-exclusive premiums and to find other amazing signed books, prints, and apparel.