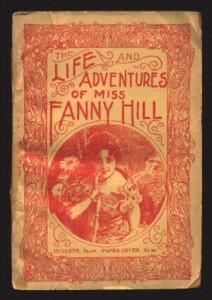 Memoirs of a Woman of Pleasure

In 1966, eleven years after the decision in Roth v. United States held that obscenity was not protected by the First Amendment and attempted to define obscene speech, came the landmark case of Memoirs v. Massachusetts. This case is about a book, originally published in 1748, that explores the sexual exploits of a 15-year-old prostitute in England and her attempts to understand love. Upon publication in the United States, the Commonwealth of Massachusetts filed a suit to have the book declared obscene, which was eventually overruled by the Supreme Court in an attempt to further understand and modify the court’s definition of obscenity.

While in a debtors prison, John Cleland wrote Memoirs of a Woman of Pleasure, which was shunned for its explicit content but hailed for being the first pornography to use the form of a novel. Memoirs (aka Fanny Hill) tells the story of a young girl named Fanny Hill as she tries to make a life for herself after the death of both of her parents. Her desperate search for employment leads her become prostitute. The book consists primarily of letters written by Fanny to an unknown recipient, letters in which she gives in-depth descriptions of a multitude of sexual experiences. At the end of her recollections, Fanny realizes that sex without love is vapid and meaningless, and she chooses to marry her first lover. This character may be familiar to comic book fans, as she appeared in Alan Moore’s The League of Extraordinary Gentlemen series.

The troubles with the book began in 1963, when Putnam began republishing Fanny Hill in the United States. The book received an unprecedented amount of attention. Many colleges were placing a large number of orders, and the Library of Congress even requested the right to have the book published in braille. As the book garnered attention throughout the country, under General Laws of Massachusetts, Chapter 272, §§ 28C-28H, the Commonwealth of Massachusetts attempted to have the book labeled obscene, which would allow publication of the book to be halted in the state. The trial court ruled that the book was obscene and therefore not entitled to protection by the First Amendment. The Massachusetts Supreme Judicial Court affirmed. In an opinion written by Justice Brennan, the Supreme Court of the United States reversed the lower ruling under a new reading of Roth v. United States.

Justice Brennan articulated the holding in Roth as:

The third element is a new reading of Roth, as the language above that was quoted from the case doesn’t indicate anything about social value. The dissent also points out there is no other obscenity case that shows evidence that the new element has become part of the Roth test. Nonetheless, the court includes this element and it is ultimately what leads to the reversal of the lower court decisions.

Fanny Hill, as she appears in Alan Moore and Kevin O’Neill’s The League of Extraordinary Gentlemen

In regards to the question of Fanny Hill being “utterly without redeeming social value,” Justice Brennan wrote:

“The Supreme Judicial Court erred in holding that a book need not be “unqualifiedly worthless before it can be deemed obscene.” A book cannot be proscribed unless it is found to be utterly without redeeming social value. This is so even though the book is found to possess the requisite prurient appeal and to be patently offensive. Each of the three federal constitutional criteria is to be applied independently; the social value of the book can neither be weighed against nor canceled by its prurient appeal or patent offensiveness. Hence, even on the view of the court below that Memoirs possessed only a modicum of social value, its judgment must be reversed as being founded on an erroneous interpretation of a federal constitutional standard.

Despite the fact that Fanny Hill was found to appeal to prurient interests and was considered patently offensive, it could not be classified as obscene because it did contain some social value. Expert testimony explained that despite graphic content, the book was a structured novel with literary merit. The book even ended with a positive message that sex with love is far superior to meaningless sex as a prostitute. It could not be fairly said that this book was “utterly without social value,” therefore the book was not obscene and must be entitled to First Amendment protection. Proving that something contains absolutely zero social value, as the Supreme Court would later come to realize, was an extremely difficult standard to prove, which would lead to further reform in the journey to define obscenity.