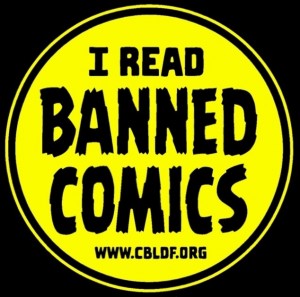 Banned Books Week is here, and libraries across the country have banned and challenged books on display. This year, the King Library at Miami University in Oxford, Ohio (151 South Campus Avenue), is focusing on comic books in particular!

In 1954, the comic book industry began a campaign of self-censorship, the product of lengthy media and governmental attacks on comics that accused them of fostering juvenile delinquency, violence, and more. The Comics Code Authority was established to protect the industry from government intervention, but it instead handicapped creative free expression in comic books for decades, and nearly led to the end of the medium.

Even though the Comics Code is now defunct, comic books are still one of the most commonly challenged publications in libraries. The display, which is located in the foyer of the King Library, includes a number of historical resources on the Comics Code:

The horror! the horror! : comic books the government didn’t want you to read!  edited by Jim Trombetta, with an introduction by R. L. Stine.  Available by request through OhioLINK.

Seduction of the innocent by Fredric Wertham.  Access through Alexander Street Press.

Further, the library has several of the most commonly banned comics available for perusal. For more information about the display, please visit the King Library blog.

← Watch Brad Meltzer Talk Banned Books During CBLDF’s Hangout on Air on Google+!
Be Counted! Join CBLDF To Make A Difference in Your Community! →