This weekend, the comics world converges on New York City for New York Comic-Con, which goes down October 10 – 13 at the Javits Center. CBLDF will be at booth #965 throughout the show, and we’ll have parties, panels, signings, and more! All proceeds from the show will benefit CBLDF’s important work defending the First Amendment rights of the comics community! 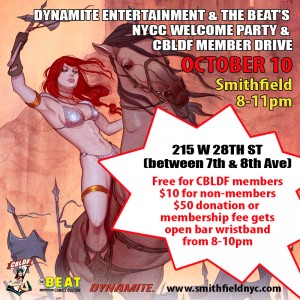 Dynamite Entertainment & The Beat kick NYCC off with a big bang on Thursday, October 10! Come join comics’ greatest creators and Be Counted as a member of the Comic Book Legal Defense Fund at the Smithfield in the heart of NYC! This party is free for all CBLDF members, and if you join or renew at the event you’ll get in for free and receive special gifts from Dynamite & CBLDF! Donors joining or renewing their CBLDF Membership at the $50 level or higher will receive a free open bar wristband, while supplies last!

Free for CBLDF members!
$10 for non-members
$50 donation or membership fee gets open bar wristband from 8-10 while supplies last

NYC-based online artist community Tenlegs, found at Tenlegs.com, announced that it will co-sponsor the SonicBoomBox New York Comic Con After Party in conjunction with Midtown Comics and other sponsors.

An all-star panel of kids comics creators and educators discuss ways to get children excited about reading, encourage creativity and cultivate a love of literature using great graphic novels and comics.

While you’re at the show, don’t miss your chance to pick up the extremely limited Hack / Slash variant cover of CBLDF Liberty Annual 2013, available only from CBLDF! Limited to 500 copies, this cover will debut at NYCC, so get your copy while you can!

New board member Jeff Smith has also contributed signed copies of his brand new graphic novel RASL!  We’ll have both the limited and regular edition signed by Jeff, so don’t miss out!

CBLDF continues our efforts for manga freedom by providing special events with translator and manga expert Dan Kanemitsu throughout NYCC weekend including a lecture at Kinokuniya Bookstore on Saturday and appearances at the CBLDF booth.  Kanemitsu is a well-known expert on changes in Japanese law affecting manga freedom, as well as a translator whose work has appeared in popular franchises including Evangelion.  We’ll also have special membership incentives for manga freedom supporters.

Join manga expert Dan Kanemitsu and CBLDF Executive Director Charles Brownstein for a discussion of current trends in international manga freedom and what they mean for readers.  Kanemitsu will provide an overview of how new regulation in Tokyo is affecting the manga industry, as well as how the professional and doujinshi communities have responded.  Take a look inside the manga world with an expert at this limited seating special event. Get your free ticket here

Kanemitsu will appear at CBLDF Booth #965 throughout the convention weekend to answer questions about the Japanese manga industry, translation, Evangelion and much more.  Dan will appear on Friday from 12 – 1, Saturday from 5 – 6, and Sunday from 12 – 1

Get special manga incentives when you join the CBLDF at NYCC!  These include:

Come see CBLDF and Be Counted this weekend at New York Comic Con! For more details, visit the NYCC website.