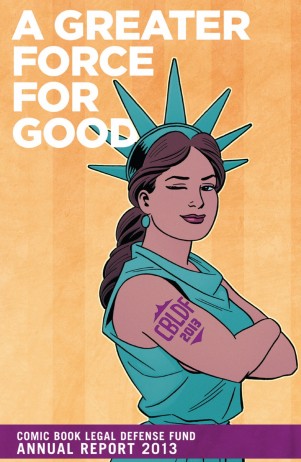 CBLDF has joined KRRP in defending several books this year, including The Perks of Being a Wallflower, The Absolutely True Diary of a Part-Time Indian (which was challenged several times over the course of 2013), Invisible Man, Neverwhere, The Diary of Anne Frank, and many more. CBLDF joins coalition efforts like this one to protect the freedom to read comics. Censorship manifests in many ways, and the unique visual nature of comics makes them more prone to censorship than other types of books. Taking an active stand against all instances of censorship curbs precedent that could adversely affect the rights upon which comics readers depend.

CBLDF is able to perform our important work defending the right to read thanks to the direct contributions of our members and supporters. Your donations in December have a direct impact on our ability to perform our work in 2014. Please help CBLDF continue our important work protecting the freedom to read comics by picking up CBLDF apparel and signed graphic novels, by becoming a member, or by making a tax-deductible cash contribution.

NEW YORK–As the New Year approaches, Acacia O’Connor of the Kids’ Right to Read Project (KRRP) is still marveling at the flurry of book ban attempts that blew through the final quarter of 2013. In the month of November, alone, KRRP investigated three times the average number of incidents, adding to an overall rise in cases for the entire year.

“It has been a sprint since the beginning of the school year,” said O’Connor. “We would settle one issue and wake up the next morning to find out another book was on the chopping block.”

KRRP is a grassroots endeavor founded by the National Coalition Against Censorship and the American Booksellers Foundation for Free Expression and supported by the Association of American Publishers and the Comic Book Legal Defense Fund. The project offers support, education, and advocacy to people facing book challenges or bans, while engaging local activists in promoting the freedom to read.

And the business of book banning is booming. To date in 2013, KRRP confronted 49 incidents in 29 states, a 53% increase in activity from last year. The last half of 2013 was unsettlingly active, with the project battling 31 new incidents–compared to only 14 incidents in that same period during 2012.

Most of the challengers were parents of district students or library patrons, though a handful were local or state government officials. Of the more than two dozen incidents KRRP faced from September to December, the majority involved materials used in classroom instruction.

Another trend that emerged in the fall: challenges to notable works by well-known minority writers, including Invisible Man, The Bluest Eye, The Color Purple, The Absolutely True Diary of a Part-Time Indian, The House of the Spirits and Bless Me, Ultima.

“Whether or not patterns like this are the result of coordination between would-be censors across the country is impossible to say,” said O’Connor. “But there are moments, when a half-dozen or so challenges regarding race or LGBT content hit within a couple weeks, where you just have to ask ‘what is going on out there?’”

But there is one positive trend to report: thanks to KRRP’s involvement and advocacy, there has also been a notable increase in positive outcomes to book challenges. The project saw two victories in the past week alone: Rudolfo Anaya’s Bless Me, Ultima was returned to sophomore English classrooms in Driggs, ID and Isabel Allende’s The House of the Spirits will likewise remain in Watauga County Schools in Boone, NC.

KRRP confronts incidents as they are reported, but it remains difficult to pinpoint how many total challenges or removals happen in a given year as many go unreported.

We scored many victories for free speech in 2013, but we need your help to keep fighting for the right to read in 2014! Get in the Spirit of Giving, and help support CBLDF’s important First Amendment work by visiting the Rewards Zone, making a donation, or becoming a member of CBLDF!