The climate of the video gaming industry has long been riddled with controversy on the content of various titles: Are they too violent? Are they capitalizing on war as a form of entertainment? Are they objectifying women? While these may be important questions consumers should ask themselves when choosing a videogame, it seems that some publishers and console makers could be taking the freedom of choice out of their customer’s hands.

Recently, Square Enix, a Japanese game development company, edited their title Bravely Default for European release on the Nintendo 3DS. With a US release in the pipeline, it begs the question: Will more edits be made for Western audiences? Bravely Default is a classic RPG, considered by many to be a spiritual successor to Final Fantasy: The 4 Heroes of Light. The game was originally released in Japan and will soon be available in larger markets—but with some changes. 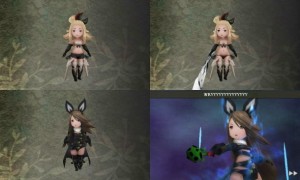 It’s worth pointing out that the age of consent in Japan is 13, and in the original version of the game, the character is around 15. It could be considered a nod to cultural and legal differences by increasing her age to 18, the age of consent in most US states, and there are restrictions on the depiction of underage characters in the US. In Europe, the age of consent ranges from 14-18. While restricting what fictional characters can do based on their age is quite questionable (and a more problematic form of actual censorship), corporations are unlikely to take the risk of producing potentially illegal materials.

While many gamers are taking offense to the changes in Bravely Default, the real issue is one of corporations believing in their customer’s ability to make their own choices. As an avid gamer, I don’t like the idea of having my options restricted by others when I am perfectly capable deciding what I want to see. It’s up to me to research any media I consume and have sovereignty over selection. If I don’t want to play out the adventures of a scantily clad teenager, I don’t have to—and I don’t need Nintendo or anyone else making that call for me.

Should a Japanese game maker change their product to appeal to Western audiences, and should Western audiences be upset that they aren’t getting the product as originally intended? When it comes to upholding creative choices, should the power rest with the console makers to advocate, insist, and force an editorial process? As more and more products cross international borders, this question will continue to arise. Regardless, CBLDF will continue to stand for freedom of creative expression.

Casey Gilly is a Contributing Editor for CBLDF, a Staff Writer for Comic Book Resources and, most importantly, a cat enthusiast living in Oakland, CA.