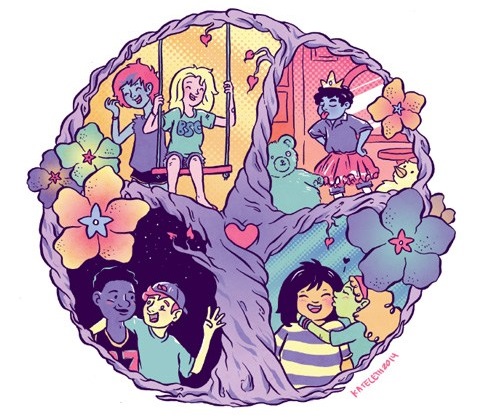 There is a common refrain that we often hear when children’s books with age-appropriate LGBT themes are challenged in schools and libraries. While there are still plenty of detractors, who bluntly declare same-sex relationships to be “unnatural,” these days there seem to be a lot more people who believe they’ve found a middle ground. They don’t have a problem with diversity, they claim, but this — whatever it is — is just too much for kids to handle. Two male penguins hatching and raising a chick together? Too much. A single page in Todd Parr’s The Family Book that says “some families have two moms or two dads”? Too much! Kate Leth of the webcomic Kate or Die has a question for these prevaricators: What’s the difference?

Leth mulled over this issue recently in her biweekly comic and column at Comics Alliance. Obviously, books and other media directed at children include plenty of heterosexual crushes, flirtations, romances, and weddings. Sometimes characters even have babies, and yet the writers, artists, and animators do not go into minute detail as to whence they came! So why, asks Leth, is the same content suddenly “too much” when the two characters are the same sex? Sadly, she says that this attitude means a lot of innocent LGBT stories never even see the light of day:

As a cartoonist I hear stories all the time of production companies, book editors and other media gatekeepers filtering out queer characters and content in all-ages entertainment. The reasoning behind it is usually the same; ‘we don’t want to offend people’, ‘we don’t want to lose money’, ‘LGBT content is too adult for the kids’.

I understand not wanting to lose out on the money spent by customers from the religious right or other large groups who may have a problem with LGBT content … sort of. It wouldn’t be my choice to worry about them, but that’s another story. What I can’t wrap my head around is the idea that non-straight romance is inherently too sexual for young audiences.

It’s true that things are changing, says Leth — slowly but surely. In comics, she cites the examples of Archie’s Kevin Keller, Drama by Raina Telgemeier, and the Lumberjanes. But it’s well past time for LGBT characters in all-ages comics to move beyond tokens or niche markets. She concludes:

It’s time to show kids that a crush is just a crush at ten years old, and that it’s okay — that if you’re that ten-year-old reader, you are okay. It might seem insignificant to people used to seeing their romances reflected in fiction and other entertainment throughout their whole lives, but there’s nothing small about the moment when an LGBT ten-year-old flips open a comic book and realizes that maybe, just maybe, there’s nothing wrong with them after all.