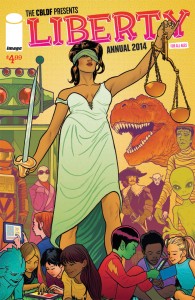 Within the pages of this year’s CBLDF Liberty Annual, a merry band of legendary creators has crafted 48 pages of thrilling adventure, powerful drama, and gut-busting hilarity! So grab your favorite life forms and gather ’round for a series of tales to test the bounds of your imagination and celebrate our freedom to do so! Edited by former Marvel editor Lauren Sankovitch, the issue is entirely composed of all-ages stories, a first for the Annual.

“I am so honored to have worked with such a brilliant group of people on the Liberty Annual,” says Sankovitch. “It’s chockfull of incredibly talented contributors from across the comics industry, all of whom donated their time to make this Annual just plain gorgeous…and fun to boot! The fact that all this work will benefit CBLDF’s work defending our right to read comics is the icing on the cake!” 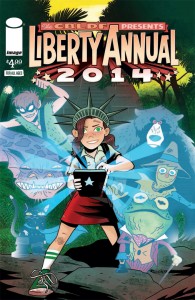 Derek Charm created a special variant cover for the issue. He is a New York based comics artist and illustrator on Trip Fantastic and Powerpuff Girls and is currently working on Cartoon Network’s Super Secret Crisis War with Louise Simonson.

Amy Chu is the writer of the story “Tabbie Gets a Lesson in Censorship,” drawn by cartoonist Shannon Wheeler and colored by Giulia Brusco. Chu is a freelance writer for DC Comics and Vertigo Comics and has a creator-owned anthology series, Girls Night Out.

Janet K. Lee illustrated the introductory page of the Annual, which was written by educator and CBLDF contributor Meryl Jaffe. Lee is a Nashville-based illustrator and Eisner award-winning co-creator of the acclaimed book Return of the Dapper Men and the series Lost Vegas with Jim McCann.

Don’t miss your chance to support the freedom to read and meet these amazing creators at JHU Comic Books (32 E. 32nd Street, New York City) on Wednesday, October 8, 6:00 – 8:00 p.m.! All proceeds from the sale of CBLDF Liberty Annual support CBLDF’s important work in defense of the freedom to read. To RSVP and for more details, visit the event page: https://www.facebook.com/events/1132680366757057/

← Hot New Premiums from SPX Now in the Rewards Zone!
CBLDF Joins Coalition to Fight Ban of The Fault in Our Stars →