MoCCA Fest 2015 gathered together creators and fans of comics, both internationally and as far away as Brooklyn. Three levels (not including the rooftop lounge) brimmed with artists and micro-publishers promoting new and original works.  CBLDF was in the mix, receiving tremendous support from attendees and exhibitors alike.

One Comic Defender even made us customized CBLDF cupcakes! 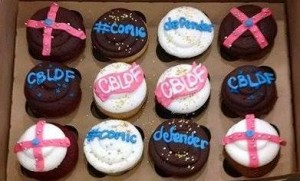 Other visitors include Greg Ruth, who left us signed copies of his works The 52 Weeks Project as well as the illustrated storybook Coming Home. The 52 Weeks Project is a collection of weekly illustrations brushed by Ruth over the span of two years. He was able to create in excess of 112 drawings whose themes span from whimsy to reverence, with an introduction by Ethan Hawke. Coming Home celebrates the reunion of military families, and shows both the eagerness and anticipation of a boy awaiting the return of a long missed parent.

During the event, the CBLDF hosted two signings.

Scott McCloud sat down at our table to meet dozens of fans, signing not only his newest graphic novel, The Sculptor, but a variety of works from his graphic canon brought by supporters. Even after greeting and personalizing his works for two hours, Scott was kind enough to sign additional books, now available to you on the CBLDF Rewards Zone. There you can find signed copies of The Sculptor, Understanding Comics, and Reinventing Comics.

Sunday, we were joined by creative team Mark Newgarden and Megan Cash signing the newest installation of their Bow-Wow series, Bow-Wow’s Nightmare Neighbors. Each book contains not only both signatures, but an additional character doodle for readers to enjoy.