CBLDF has returned from Small Press Expo with spectacular new premiums for our supporters! Creators Phoebe Gloeckner, Brandon Graham, Scott McCloud, and Jessica Abel joined us for signings at SPX, and now, we’re delighted to offer signed books from these amazing creators in the Rewards Zone!

Phoebe Gloeckner’s Diary of a Teenage Girl hit the big screen in August to critical acclaim, extending the reach of her celebrated — and sometimes challenged — 2002 graphic novel about the transition of a girl into womanhood and her interactions with the changing world around her. This edition not only comes signed by Gloeckner, but includes a new introduction from the author as well as photographs and diary entries from her own childhood. While at the CBLDF booth, Gloeckner also signed A Child’s Life, which collects more of her autobiographical stories.

While at the CBLDF booth, Brandon Graham inscribed his graphic novels King City and Multiple Warheads. Before he left the booth, Graham also signed and sketched copies of his CBLDF Exclusive Sketchbook, which premiered at SPX 2014. This zine-sized exclusive contains preliminary sketches from his miniseries Multiple Warheads and original illustrations!

Jessica Abel swept through her copies of Out on a Wire during her signing, but she left us signed copies of her graphic novel La Perdida as well as a collection of her earliest works, Soundtrack. Spanning back to 1990, this paperback contains a variety of work from comic strips to self-published minicomics. 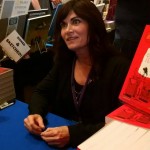 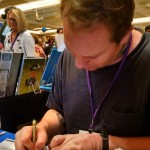 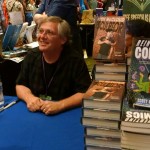 All of the action didn’t take place behind the booth, however, as CBLDF was able to visit many other creators who supported the Fund by providing us with new signed premiums to offer in the Rewards Zone. Creators like Farel Dalrymple, Katie Skelly, and Stuart Immonen all continue to defend free speech by donating their time and autograph hands to CBLDF!

We want to thank all of the creators for their support, and CBLDF extends a huge thanks also to SPX and its organizers for their continued support of our fight for the right to read!

CBLDF continues to spread awareness of censorship around the country by attending more conventions, like Baltimore Comic Con this weekend, where we hope to gather even more great premiums for our supporters!