This past weekend, Egyptian writer Ahmed Naji went to court to face charges that an excerpt of his novel The Use of Life violates decency laws. Naji is facing a two-year jail sentence and a 10,000 Egyptian pound ($1,245) fine, but Naji’s lawyer Nasser Amin isn’t making it easy for the prosecutors to defend their case.

Naji’s work incorporates journalism, prose, various genres, and interwoven and sometimes disruptive literary devices to convey emotions, ideas, and meaning. The Use of Life also embraces visual elements, including illustrations and comics by Ayman al-Zurqany, and deals with topics of sexuality and drug use. The excerpt, printed in 2014 in Akhbar al-Adab magazine, came under attack for its depictions of sexual acts and drug use after a 65-year-old man claimed to have suffered heart palpitations and severe illness due to the passage.

On Saturday, Amin made a motion challenging the law under which Naji is being prosecuted. Requesting a constitutional court review, Amin argues that the law only extends to published materials that incite violence or discrimination and that the acts of prosecutors are unconstitutional in Naji’s case. 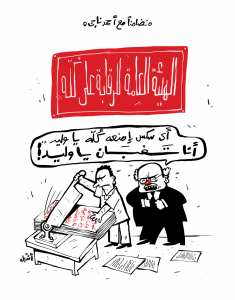 “Censor all the sex Walid… I can’t handle it Walid!

Amin, who served as an alternate committee member during the drafting of the current Egyptian constitution, argued that the legal actions being taken against Naji are part of a larger attempt by the government to exert control over all forms of press, both secular and non-secular. “Outside this hall… is a repressive authority which claims it is protecting the homeland and virtue from (the Islamists),” said Amin. “Each of them tries to overstate over the other who is the more protective of virtue and morals.”

As Amin is challenging the constitutionality of Naji’s case within the courtroom, the writer is also receiving support from cartoonist and comic artist Andeel outside the legal proceedings. In a recent cartoon published on Mada Masr entitled “Society can’t take it,” Andeel illustrates just how censorious the government has become. Containing the caption: “In solidarity with Ahmed Naji,” Andeel’s cartoon depicts “The General Committee for Censoring Everything” with an official yelling “censor all the sex Walid… I can’t handle it Walid!”

Although Ahmed Naji’s trial has just begun, steps are already being taken by those who support him to also try and change the way in which the Egyptian government approaches creative works and censorship.