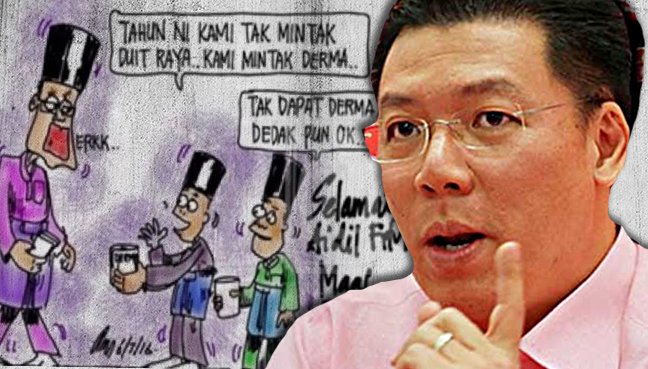 A Malaysian Member of Parliament is under investigation for sedition after he allegedly shared a cartoon that offended some members of the majority party on Facebook. After heated demonstrations against Nga Kor Ming and his political party DAP this week, political cartoonist Zunar facetiously offered to lead “a free ‘let’s laugh’ course” for the opponents and the Inspector-General of Police who ordered the investigation.

Nga himself says that he actually didn’t share the cartoon at all; he told news site Malaysiakini that it was on an unauthorized fan page using his name that has since been deactivated. The content of the cartoon and the cause for offense is more than a bit opaque to those unfamiliar with Malaysian culture and politics. In the panel by an unidentified artist, two boys are shown participating in Hari Raya, a festival marking the end of Ramadan in Malaysia. One of the traditions of the day calls for children to be “given token sums of money from their parents or elders.” Similar to trick-or-treating, the youngsters approach adults and ask for duit raya. As Zunar points out, this custom is adapted from the Chinese tradition of giving children money in red envelopes to mark the Lunar New Year or other special occasions, but in Malaysia it has become closely associated with Ramadan.

In the cartoon in question, however, the boys are asking not for duit raya but for dedak, which literally means animal feed but “is commonly used in political circles to refer to political handouts used to win supporters and allies.” This is an allusion to the ongoing 1MDB scandal, in which $700 million disappeared from a state development fund and allegedly turned up in Prime Minister Najib Razak’s personal bank account. Najib denies any wrongdoing, claiming that the infusion of cash was a “personal donation from the Saudi royal family.” The scandal has transfixed Malaysians for over a year and is a frequent topic in Zunar’s own cartoons as well.

After the cartoon appeared on Facebook last week, supporters of Najib’s ruling coalition blamed Nga Kor Ming for “disrespecting Islam” with the reference to Hari Raya. Protesters threw “hell notes” outside of DAP headquarters wishing for the center-left party’s “death” and clashed with police when they were prevented from entering the building. Nevertheless, it is Nga himself who could face charges because of the incident. In announcing the sedition investigation last week, Inspector-General of Police Khalid Abu Bakr reminded “everyone to be careful and refrain from making such sensitive statements.” Nga has responded by filing his own police report alleging a “smear campaign” against him.

Whether Nga actually posted the cartoon or not, Zunar reminded all parties that “it is a cartoonist’s responsibility to bring forward current issues in his art. And that was what this caricature did.” A Muslim himself, he jokingly offered “a free ‘let’s laugh’ course” for Khalid and the protesters, since “a lack of laughter can lead to depression and other diseases.” After all, he said, “a nation will never progress if they don’t know how to laugh at certain matters like this.”