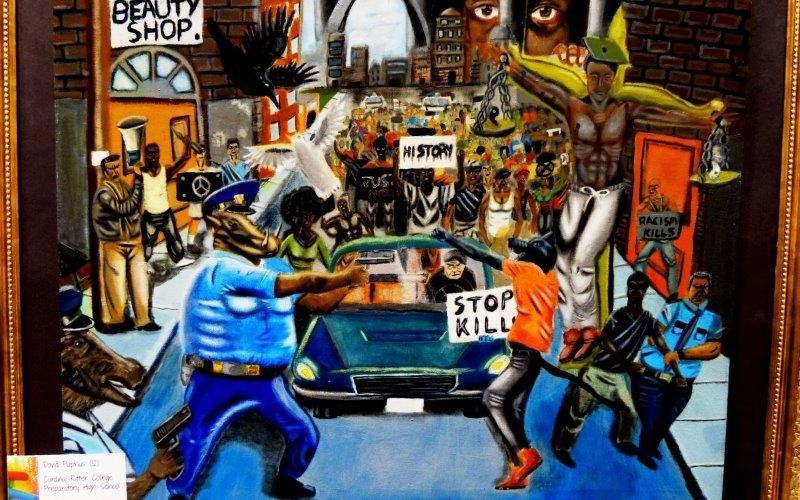 Congressman Duncan Hunter of California personally removed a student art contest painting from the wall of a U.S. Capitol office building late last week, claiming he was exercising his First Amendment right to express disapproval of the work because he was offended by its depiction of police with animal heads. Fellow Rep. Lacy Clay of Missouri feels quite differently about the removal of his constituent’s artwork, however, and is pressing Capitol Police to file charges against Hunter for theft. As of this morning the painting was back up after Clay and other members of the Congressional Black Caucus restored it.

The untitled painting by 18-year-old St. Louis resident David Pulphus, a recent high school graduate, depicts a protest march foregrounded by a police officer aiming his weapon at an unarmed subject. At least one officer in the painting is shown with the head of a boar, while his target appears to be a wolf or black panther, as The Hill suggests. Also prominently featured in the painting is a young African American man crucified on the scales of justice, and protest signs such as “RACISM KILLS.”

Last spring a panel of artists from Missouri’s 1st Congressional District, which covers part of St. Louis as well as some northwest suburbs including Ferguson, selected the painting to hang in a corridor of the Cannon House Office Building alongside other youth artwork from across the country. Pulphus completed the painting while he was a student at Cardinal Ritter College Prep High School in St. Louis.

Although the painting has hung in the corridor since June, it raised no outside notice until this month when Fox News’ Eric Bolling urged viewers to call Rep. Clay or their own Congressional representatives to demand that the painting be taken down. Clay staunchly refused to censor the work, but on Friday Rep. Hunter literally took matters into his own hands, unscrewing the painting from the wall and then depositing it with Clay’s office staff. Hunter’s Chief of Staff Joe Kasper issued a statement to CNN claiming there is “nothing appropriate about a painting that depicts police officers as pigs.”

This morning Rep. Clay and several fellow members of the Congressional Black Caucus restored the painting to the corridor wall, after which Clay made brief remarks to the gathered press. Noting that he has “numerous family members that are part of law enforcement,” he averred that “I do not agree or disagree with the painting, but I will fight to protect this young man’s right to express himself.” In an op-ed for the St. Louis American newspaper, he expanded on this principle:

This constitutionally protected freedom is essential. The right to express one’s thoughts and to communicate freely with others affirms the dignity and worth of each and every American, regardless of their point of view, and regardless of who might be offended.

In response to reports that House Speaker Paul Ryan is looking into filing a request with the Architect of the Capitol to have the painting permanently removed, Rep. Clay said he would welcome the chance for debate rather than the current back-and-forth actions:

If there’s a process to remove this painting, well, let’s start the process. And let’s discuss it. But you just don’t walk up here and remove a painting because you are offended by it.

Within a few hours after the painting was re-hung this morning, though, that’s exactly what yet another Congressman did. This time it was Rep. Doug Lamborn of Colorado, and within 15 minutes the artwork was once again back up courtesy of Rep. Clay.