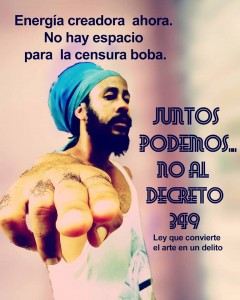 Starting in December, the Cuban Government hopes to have pre-approval overall Cuban arts and literature, according to the dystopian sounding Decree 349. The legislation was introduced in July in the official Cuban state paper, Gaceta de Cuba, and has spawned a backlash from local artists, writers, and musicians.

Artistas Cubanxs en Contra del Decreto 349 (Cuban Artists Against Decree 349) sent a letter to President Miguel Diaz Canel, who has only been in office since April, asking for a sit down between the dissenting artist and the state, since no one was given input on the legislation. From the letter:

“We believe that Decree 349 does not present a sound vision of the future for Cuban culture. The new laws restrict the creativity of the Cuban people, and criminalize[s] independently produced art, limiting the ability to determine who can be an artist to a state institution.”

Not only will creators require preapproval of their art, but those that commonly act as patrons of the arts, such as bars and cafes, will be required to get permission before using their space to host performaces. Bookstores will also be affected, since the sale of literature “with content that is prejudicial to ethical and cultural value[s]” will be illegal. The venues can be fined for failing to heed the new law.

Coco Fusco, a Cuban-American artist and scholar who serves as Director of Intermedia Initiatives at Parsons The New School for Design, was one of the signatories of the letter to President Canel, and released her own statement about the legislations, called out the racial and sociology-economic bias intrinsic to the law, which Fusco says blatantly targets rap and reggaetone. She wrote to artnet News,

““The law will empower a new cadre of inspectors to act as roving censors that can shut any cultural event down at a moment’s notice. Not only will artists be penalized with fines, possible confiscation of their equipment, and eventual arrest—any owner of an establishment that provides space and resources for performances and events will also be liable.”

But the Cuban authorities aren’t waiting till December to start arresting artists for work they dislike. In July, a performance in front of Havan’s capitol building led to arrests of participating artists, then again in August police arrested artists to prevent a protest concert and assisted at least a dozen musicians in attendance. Both times, was among those arrested. Alcántara had been picked up by the police before, supposedly for suspicion of having illegal materials, but really to discourage an independent art biennial he organized to replace the state sponsored one that was cancelled due to Hurricane Irma damage.

This new legislation will affect cartoonists and comics creators, falling both into the art category and the book sales restrictions. It’s crucial that free speech advocates around the world stand with Cuba’s artists and demand this decree removed from legislation. With global pressure, it is possible (if not likely) that Cuba will be shamed into doing the right thing.

Short of that, the only hope for those involved, is that great art often comes from overt oppression – which is small consolation to those being silenced.