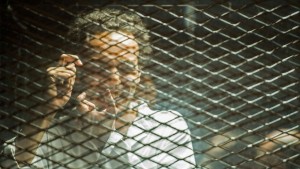 On September 8th, 2018, photojournalist Mahmoud Abou Zeid, also known as Shawkan, was convicted for murder and membership in a terrorist organization after his arrest in August 2013 while “documenting the government’s violent dispersal of protesters at Rab’a Al Adweya Square that killed over 1,000 civilians.” Shawkan is set to be released shortly, having already served his sentence in the half-decade spent awaiting trial, but he will be forced to check in daily with the police for the next five years. So the Egyptian government will get to control his life for a decade when all of this is finally done, over Shawkan doing his job and taking photos at a protest where the Egyptian government killed 1,000 citizens.

When Shawkan was arrested August 14, 2013, he was taking pictures for U.K. based photo agency and citizen journalism site, Demotix. Two other foreign reporters were detained at the same time but both of them were released shortly thereafter. Shawkan spent two years in Cairo’s Tora Prison without any official charges against him, his health deteriorated in the poor conditions of the facility. Then in September 2015, Shawkan was charged with a slew of outlandish and baseless charges including murder, attempted murder, weapons possession, illegal assembly, and more as part of a mass trial for 734 defendants. In March of this year, the prosecutor of the case announced he was going for the Death Penalty in Shawkan’s case. Luckily PEN American and dozens of other human rights and journalists’ protection organizations joined together to create worldwide attention for the case, and urge the U.S. government to call on Egypt to immediately drop the charges and release Shawkan. He was not released and the charges weren’t dropped, but in the sentencing for over 700 defendants on September 8th of this year, Shawkan was only sentenced to five years, and more than 10% of the cases ended in death sentences.

“While we are deeply relieved that Shawkan will soon walk free, his unjust and illegitimate detention for his work as a photojournalist has been a gross violation of his rights and ability to work freely, and his conviction is an absurdity. Shawkan’s arrest for doing his job was emblematic of the Egyptian authorities’ extreme disregard for freedom of expression and of the press. We look forward to his imminent release, but call on the Egyptian authorities to remove immediately all further restrictions on his rights and freedom of movement.”

This is all a part of a constantly tightening autocratic government bent on destroying freedom of expression. Under Abdel Fattah el-Sisi’s rule, new laws have been instituted to punish protestors, criminalizing media outlets that dispute the government’s narrative as “fake news”, and prosecuting individuals for differing viewpoints and religious beliefs with fines, prison, and even death sentences.

As of the end of 2017, there were 20 journalists imprisoned in Egypt, and in Reporters Without Borders’ 2017 ranking of press freedom, Egypt was listed at 161 out of 180 countries. PEN America has advocated on behalf of other journalists and creative artists prosecuted for their work, including writer Ahmed Naji, PEN America’s 2016 PEN/Barbey Freedom to Write award winner, and lyricist Gahal El-Behairy, who is currently also on trial.

To read the full press release from PEN America, go to: https://pen.org/press-release/conviction-of-shawkan/

Check out the CBLDF coverage of Ahmed Naji, and the recent fines he had imposed for his book Using Life.