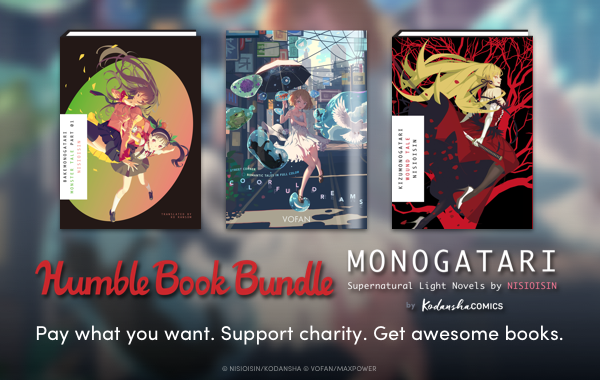 Stack your digital library with the hit illustrated Supernatural series MONOGATARI and protect the First Amendment when you get the newest Humble Bundle from Kodansha! Pay what you want for digital, DRM-Free light novels with this book bundle, MONOGATARI—Supernatural Light Novels by NISIOISIN. This series has been running since 2006, and you can get 22 volumes in a variety of formats, for a fraction of the cost. Plus each bundle supports the critical free expression work of Comic Book Legal Defense Fund and American Civil Liberties Union. Get yours today!

This series follow high school junior Koyomi Araragi as he helps his female classmates with ghosts, vampires, and all other types of paranormal problems. Don’t miss your chance to score a huge catalog of this fan-favorite series, this bundle runs from Wednesday, November 13th, 11:00am Pacific to Wednesday, December 4th, 11:00am Pacific.

Check out the lineup!