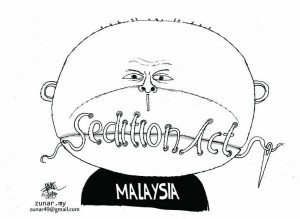 Malaysian cartoonist Zunar, the pen name of Zulkiflee Anwar Ulhaque, was arrested for seidition in 2010, hours before a collection of his new political cartoons was published. Zunar faced down his government and successfully avoided the sedition charges and won compensation for books that government officials seized in a raid of his office. Unfortunately, he wasn’t as successful in appealing his arrest. His arrest under Malaysia’s Sedition Act was upheld as lawful despite the contradictory ruling regarding the seizure.

Zunar was awarded Cartoonist Rights Network International’s Award for Courage in Editorial Cartooning in 2011, and he recently appeared at Busboys and Poets in Washington DC. Mike Rhode with ComicsDC, a blog dedicated to providing information about comics and related media in the Washington DC area, attended the reading and made an audio recording of the event.

You can listen to Zunar describe his work as a cartoonist and the obstacles he faced below or by visiting this website. To view Rhode’s pictures of Zunar from the event, visit ComicsDC.