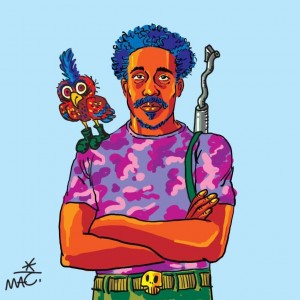 Egyptian cartoonist Makhlouf was among dozens of people arrested late last week in advance of planned street protests today. After being held overnight and released without charge early Friday morning, he said on Facebook that his high profile may have saved him, but “others who are less lucky and have nothing to do with politics stay in jail.”

Many Egyptians’ growing discontent with President Abdel Fattah el-Sisi’s government recently boiled over after he ceded two uninhabited but highly strategic Red Sea islands to Saudi Arabia. Activists accused him of selling the territory, setting off a first round of smaller protests earlier this month. Mass demonstrations were planned for today, which is also a national holiday commemorating Israel’s 1982 withdrawal from the Sinai Peninsula, but have mostly been dispersed with tear gas and mass arrests. Pro-Sisi demonstrations, on the other hand, have been allowed to go forward.

When the antigovernment protests were in the planning stages last week, police swept into cafes frequented by activists and indiscriminately arrested many of the people they found inside. Makhlouf was one of at least 101 people arrested across the country, and gave an account of his detention on Facebook:

It was a depressing experience, sad but not cruel. We were arrested from a downtown [Cairo] cafe, they held us for a few hours and left us without a word. It is not fair, they let us go because we are known, while others who are less lucky and have nothing to do with politics stay in jail.

Makhlouf is one of Egypt’s most well-known cartoonists and the cartoon editor for the privately owned newspaper Al-Masry Al-Youm. He is also one of the founders of the satirical magazine Tok Tok. Some of his work can be found with English translations at Al-Masry’s sister site Egypt Independent.