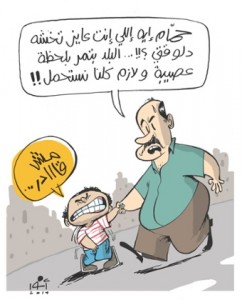 A father tells his son to “share the burden,” echoing Sisi. © Mohamed Anwar

In the tumultuous years since Egyptians overthrew ex-dictator Hosni Mubarak, political cartoonists have continued to lampoon whichever government is in power–but sometimes they must find ways to be circumspect about it. An article from last week’s Sunday Observer took the current pulse of Egyptian political cartooning, with one artist saying that right now is “the hardest era in which to cartoon in a mainstream newspaper” in that country.

Ironically perhaps, cartoonists actually had the most creative freedom under Mubarak’s successor Mohamed Morsi, who was democratically elected but widely unpopular, particularly among the young secular demographic. Jonathan Guyer, a scholar of Egyptian cartoons, explained that while artists mostly never dared to depict Mubarak himself, they had no such qualms about Morsi: “newspaper front pages had cartoons of him – really derogatory, really emphasising his misguided approach.” But when Morsi was in turn overthrown by the secular Abdel Fattah el-Sisi, some cartoonists refrained from any criticism of the new leader while others returned to the oblique symbolism that they employed under Mubarak.

Any cartoonist working in a mainstream Egyptian publication who wishes to criticize Sisi or his government knows it must be done indirectly. In a recent cartoon Mohamed Anwar, who publishes in the newspaper al-Masry al-Youm, lightly mocked Sisi’s frequent exhortations for Egyptians to “share the burden” by drawing a father repeating that phrase to his son who urgently needs to visit the restroom. But even that indirect criticism was too much for one reader, who called Anwar’s office in tears to ask why he was “doing this to Sisi.”

Some other cartoonists find more creative freedom by publishing online or in non-mainstream publications such as Tok-Tok, described as “Egypt’s version of Mad magazine.” One example is Andeel, who does not shy away from caricaturing Sisi for Tok-Tok readers and Facebook fans. He takes a nonchalant view of his resistance to government oppression:

I know westerners may have a sensational idea of what it’s like to be part of the opposition in an oppressive country, but in reality it’s just a job like any other. Since I started making cartoons when I was 17, I knew that a big part of my job was about dealing with censorship. You can’t be against those who have the power and not expect them to do everything they can to stop you from telling people that they suck.

There is a tradeoff for the creative freedom enjoyed by political cartoonists like Andeel, though: they’re usually preaching to the choir. Anwar says this is why he prefers to remain in the mainstream press, even though he may not always be able to draw exactly what he wants:

I don’t only want to be talking to people who agree with me. I can put my cartoon online, [for the] 50,000 followers who have the same background and beliefs as me. But at al-Masry al-Youm I’m talking to 600,000 people who have completely different views to me – and that’s the aim of cartooning. It’s about making ordinary people used to certain kinds of cartoons and criticism. It’s a cumulative process.

Below, check out some of our previous articles that trace how political cartooning has changed in Egypt since Mubarak’s 2011 ouster.