In 1986, Denis Kitchen helped defend the First Amendment rights of comic shops and creators who had become the targets of censors in an increasingly hostile consumer environment, laying the groundwork for what would become the Comic Book Legal Defense Fund. Today, we’re taking a moment to celebrate the 70th birthday of the man who fought for the comics community’s right to free speech.

From pioneering many of the business practices still used in the industry today at his publishing house Kitchen Sink Press to his efforts to protect and preserve our industry’s rich history as an art agent, author, and publisher, Kitchen has been an active participant in the comics community since his childhood. Industry legends like Will Eisner, Harvey Kurtzman, and Al Capp would inspire him to become an archivist and educator to a new generation of comics reader, but the works of R. Crumb, Trina Robbins, and S. Clay Wilson—the royal court of the underground comix movement—would motivate Kitchen to help develop what we now embrace as the modern indie comics scene.

Kitchen first dipped his toes into the world of comics business by founding an alternative newspaper for his high school and later co-founding a humor magazine at the University of Wisconsin-Milwaukee in the 1960s. Although Kitchen became intimately involved in the alternative comics scene of the 1970s, as one of the first publishers to release the works of creators like Bill Griffith, Kim Deitch, and Richard Corben, his appreciation of the comics medium didn’t just look toward what new and future creators would be doing; Kitchen saw immense value in preserving the industry’s past and the work of creators who fought for their craft and laid the foundation for others to be able to do their work today. 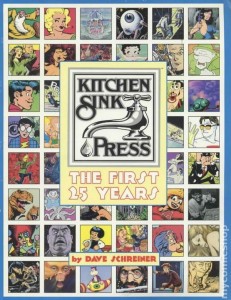 In 1970, Kitchen founded his publishing house Kitchen Sink Press. With reprints of Will Eisner’s seminal series The Spirit as well as classic comic strips by Al Capp, Milton Caniff, and Alex Raymond in affordable forms—most notably the collected graphic novel—Kitchen saw the importance of not only producing the best new comics, but also getting old comics into new readers hands. “By putting these out as trade editions, Kitchen helped raise public and retail awareness of the graphic novel format’s viability, which paved the way for comics’ march into bookstores in the 1990s,” writes ICv2 columnist Rob Salkowitz, adding:

In today’s world of graphic novel bestsellers, ubiquitous archives and artist editions, that sounds like no big deal, but during a period in which comics’ artistic (and commercial) status was still a matter of lively debate, it was a bold and risky move.

Kitchen understood this fact well. The bad taste from the 1954 Senate Subcommittee Hearing that investigated the link between comics and an increase in juvenile delinquency and the Comics Code still lingered on the general American public’s pallet. Comics were still considered lowbrow, trash, and in some cases dangerous to the impressionable minds of America’s youths. Kitchen saw the industry he loved and the creators and retailers who made a living producing and selling comics continually dragged through the mud, and in typical innovative Kitchen fashion, he decided to do something about it when a retailer came under attack for distributing one of Kitchen’s own books.

In 1986, the manager of Friendly Frank’s in Lansing, Illinois, Michael Correa, was arrested for displaying and selling alleged obscene materials to young people. A raid of the store by police saw the seizure of Omaha the Cat Dancer, Weirdo, Heavy Metal, Elektra: Assassin, Love & Rockets, Ms. Tree, Bodessey, and Elfquest. In response to the police raid, Frank contacted Denis Kitchen to see what could be done. Kitchen saw the treatment of Michael Correa as unjust and a violation of his First Amendment rights, so he teamed up with other retailers and comics creators to produce a benefit portfolio, the proceeds of which would go into a fund to help pay for Correa’s defense and legal fees. With the help of the fund, on November 16, 1989, a judge overturned Correa’s guilty verdict, noting that the comics seized were not obscenity; if anything they were simply “bizarre.” In 1990, Kitchen would formally incorporate CBLDF with the funds left over from Correa’s defense.

Whether it be reprints of classic comics or original innovative work like Scott McCloud’s Understanding Comics (which Kitchen Sink released in 1993), Kitchen has always had a really unique perspective on the industry as someone who saw the value in looking back in order to push the comics medium forward. The industry would look very different today both from a creative and legal perspective if it weren’t for Denis Kitchen. We celebrate his passion for comics and the great work that he has done that allow us to enjoy the comics we do today.