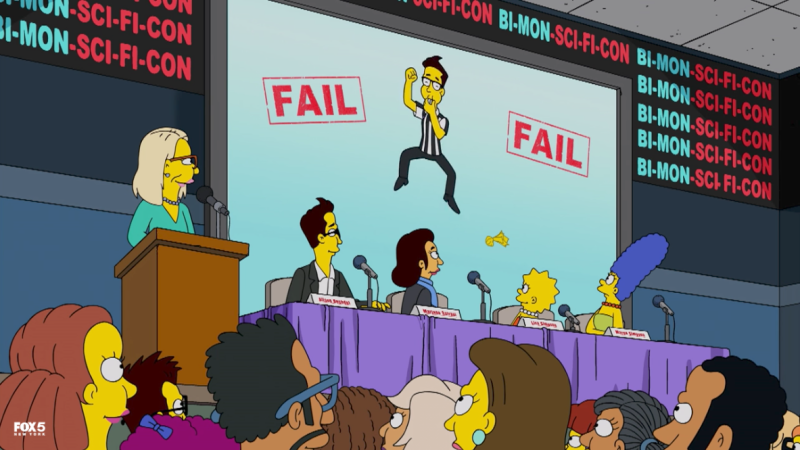 A women in comics dream team assembled for last week’s episode of The Simpsons , a team that also happened to include two creators whose graphic novels are frequently challenged — and a full slate of women who were also profiled in CBLDF’s book She Changed Comics!

A convention panel in the episode “Springfield Splendor” featured the animated likenesses and real voices of Alison Bechdel, Marjane Satrapi, and Roz Chast, along with industry newcomers Marge and Lisa Simpson discussing their smash hit Sad Girl. The scene may have been brief, but it did at least afford Bechdel the chance to deploy her Bechdel Test Fail animation in response to Marge promptly failing the test upon learning of its existence.

Persepolis, Satrapi’s memoir of growing up during the Iranian Revolution, has been challenged or banned numerous times in U.S. schools over the past several years. Parents or school administrators most often object to a few pages that depict torture of prisoners as imagined by Satrapi when she was a child. In at least two cases, moreover, parents challenged the book only because it involved Muslims. Luckily most schools have ultimately decided not to remove Persepolis from curricula or libraries — with the notable exception of Chicago Public Schools, where administrators disastrously attempted to ban it from all classrooms in 2013 before backtracking.

Bechdel’s memoir Fun Home has the distinction of being frequently challenged at the post-secondary level. Most memorably perhaps, in 2015 it was targeted along with Persepolis and two other titles by a 20-year-old student and her family who wanted the books “eradicated from the system.” The challenge came only after the Crafton Hills College student had completed the graphic novel course where she was assigned to read the books. Administrators of the community college in Yucaipa, California defended the professor and his curriculum, and ultimately backed away from a tentative plan to require disclaimers on syllabi.

We’re not aware of any challenges or bans of Roz Chast’s work, but that doesn’t mean she’s not a groundbreaker! Her wry cartoons have featured in the New Yorker and many other publications since 1978. In 2014, Chast’s memoir of her parents’ final years called Can’t We Talk About Something More Pleasant? won numerous awards and widespread critical praise, cementing her in the pantheon of cartoonists who deftly tackle subjects that may be difficult — and yes, unpleasant.

For much more about these newly minted Simpsons stars and a host of other women comic creators who changed comics during the 20th and 21st centuries, check out our book She Changed Comics at your local comics shop or right here in the Rewards Zone!