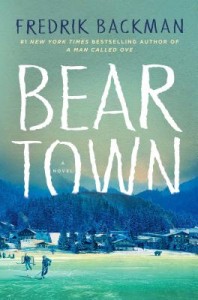 After community outrage, the North Carolina Rockville County School Board pulled Beartown by Fredrick Backman from a 10th grade English honors class required reading list, blaming the teacher’s lack of pre-approval and experience for the error.

Parents called the book “vulgar” though no specific passages were presented in the local coverage of the board meeting. According to the local news Fox 8, one pastor asked the board,

Fredrick Backman is best known for the popular book turned movie A Man Called Ove. Beartown while less well known, has received glowing reviews from Wall Street Journal, and the New York Times. It centers around a junior hockey team in a small town that has a chance to win a national tournament, bringing fame and success to a town that has been slowly dying without jobs or industry. But as the pressure builds leading to the tournament, a violent event occurs that leaves no one in the town unscathed.
Wall Street Journal writes,

“The obsession with winning is responsible for the novel’s thrills—in the fashion of underdog sports dramas, the games tend to be decided by last-minute goals—but also for its abrupt and tragic turn. At a drunken house party after a victory, Kevin sexually assaults Maya. The he-said-she-said nature of the crime divides the town, and Mr. Backman charts the struggle many have in elevating loyalties to friends and family over those to the team. There are, in the end, real acts of bravery and sacrifice in this appealing novel, but they mostly take place off the ice.”

While it wasn’t explicitly stated at the board meeting, it’s easy to hypothesize that it isn’t the hockey that parents are calling “vulgar” and “disturbing”. It isn’t uncommon for books that deal with sexual assault to be challenged and banned frequently. Such important works as Laurie Halse Anderson’s Speak, Stephen Chbosky’s Perks of Being a Wallflower, and Alice Sebold’s Lovely Bones are perennial favorites for bans and challenges.

Unfortunately, in this case, it seems that the teacher’s error in not following the guidelines for adding texts has created a situation where the school board can then neglect protocol in handling the challenges. According to the school districts Policy Code #3210 if a parent or community member wants to challenge a book,

“Objections will be reviewed pursuant to procedures established by the superintendent. Upon receipt of the objection/reconsideration request, the school media advisory committee will take the following steps:

There was no mention of a school media advisory committee in the reporting of the board meeting, simply on the board voting about the book directly. Presumably, they were allowed to forgo policy because the teacher did as well. But it’s the students who suffer, having their right to read being obstructed by the community and the school board without their thoughts taken into account.