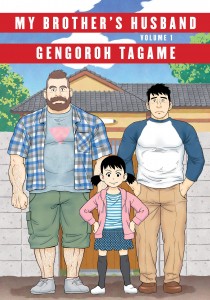 Gengoroh Tagame’s award-winning manga series My Brother’s Husband (Japanese: Otōto no Otto) has been hailed by critics and creators all over the world as a fascinating look at family, homophobia, cultural differences, and grief. Serialized in Japan from 2014 to 2017, the series was published in the U.S., translated by the acclaimed and talented Anne Ishii, in two omnibuses collecting the issues. The story focuses on single father Yaichi, his daughter Kana, and Mike Flanigan, a Candian man who shows up on their doorstep announcing he is the widower of Yaichi’s estranged twin brother. This manga is the perfect entry point into LGBTQ+ content, manga, or comics for readers unfamiliar with any of these areas, as the work is endlessly relatable to audiences of all types. But because LGBTQ+ content faces more challenges and bans than other work, here are some things to note when adding it to your library or classroom.

“When a cuddly Canadian comes to call, Yaichi—a single Japanese dad—is forced to confront his painful past. With his young daughter Kana leading the way, he gradually rethinks his assumptions about what makes a family.“Renowned manga artist Gengoroh Tagame turns his stunning draftsmanship to a story very different from his customary fare, to delightful and heartwarming effect.”
—Alison Bechdel, author of Fun Home

“The art is crisp, and the characters’ faces expressive, allowing the reader to see their hurt, confusion, and relief….A sensitive exploration of the transition some families go through when a family member comes out and a possible entry point for those needing to start conversations of their own.”
—Booklist, *starred review*

“Not only is My Brother’s Husband very touching; it’s also, for the non-Japanese reader, unexpectedly fascinating. Gay life remains largely closeted in Japan, and Tagame’s complex but deftly told story seeks to examine the effect such secrecy has, not only on those who must live it but also on their wider family relationships.”
—The Guardian

“This slice-of-life tale of cross-cultural connection skillfully balances moments of bigotry or mourning with delightfully light scenes as Yaichi, Mike, and Kana grow closer. Inviting black-and-white illustrations deftly capture the characters’ wide range of emotions, from joy to grief and beyond. As he gets to know Mike, Yaichi starts to question whether he truly accepted Ryoji’s sexuality when his brother was alive … The final pages make it clear that Yaichi still has a lot to learn and will leave readers eager for the sequel…Endearing and enlightening. ”
—Kirkus, *starred review*

“This translated first volume (exceptionally well-rendered by Anne Ishii who is clearly fluent not just with languages, but also context and cultures) includes half of the original four-part series by Gengoroh Tagame, one of Japan’s few openly gay manga creators, which concluded in Japan in May 2017. The manga proved so popular that a three-part live-action film adaptation is scheduled to debut next March 2018. Hopefully both the next translated volume and English-subtitled-film are headed Stateside sooner than later. An anti-homophobic, non-xenophobic family saga across cultures and generations? Yep, it’s a rare gift. Read it. Love it. Share it.”
— Smithsonian Asian Pacific American Center Book Dragon, Books for the Multi-CultiReader

What should I do if My Brother’s Husband is challenged?

What do you do when a comic is challenged? Much of the material in this post can be used to help defend Drama against a challenge. The American Library Association has developed these helpful tools to cope with challenges: