Martin Luther King Jr Day is more than a day off. It’s a chance for teachers of History, English, Art, Social Studies, etc. to showcase the principles of tolerance, justice, human rights, and the importance of the First Amendment’s Right to Protest. One of the amazing things about comics is that they fit into lessons about all of these things, and for a range of reading levels. Take a look at these important comics, and free CBLDF resources, to help you create lasting connections to Dr. King for your students all year round. 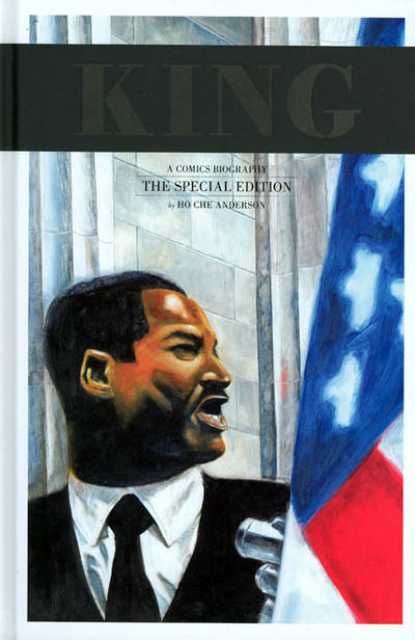 “I just want to do God’s will, and he’s allowed me to go up to the mountain. And I’ve looked over, ad I’ve seeeen the Promised Land. And I may not get there with you. But I want you to know tonight that we as a people will get to the Promised Land…Mine eyes have seen the glory of the coming of the Lord!” — Martin Luther King, Memphis, 1968

King was originally published in three volumes (1993-2002), went out of print in 2006, and was republished in a special edition in 2010. While very briefly introducing his father’s influence upon him, King focuses most of its attention on King’s adult path and his role in the civil rights movement. We learn about King through a weaving of first- and third-person narratives, providing personal glimpses and insights into the man (versus the legend). We learn why he was loved, feared, hated, and revered. We learn how he organized the Montgomery Bus Boycott and how he founded the Southern Christian Leadership Conference and their Crusade for Citizenship, Freedom Rides, Lunch Counter Boycotts, Project C, and Birmingham Manifesto. We read about the March on Washington and King’s “I Have a Dream” speech (among others); his role in Chicago and CORE and his growing struggle promoting non-violent protests; and his tragic death in 1968. Aside from King’s own personal life, we also learn of his relationship with his colleagues and communities and with politicians such as the Kennedys and Lyndon B. Johnson. We learn not only about what he did, but how he navigated through politics and social change.

Learn more about King with our free resource, Using Graphic Novels in Education. 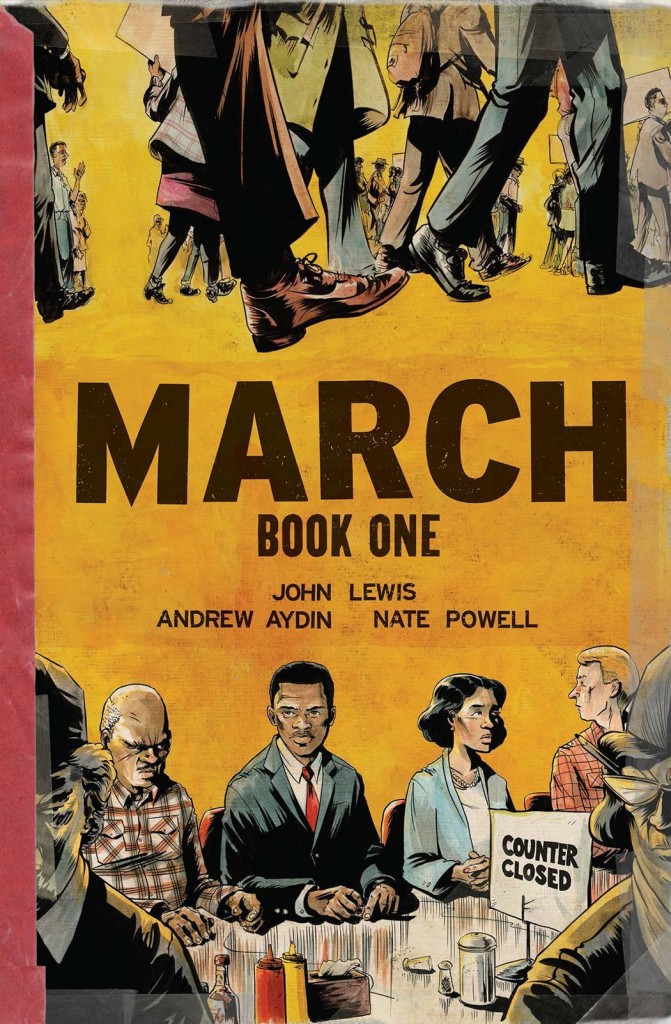 The March trilogy is John Lewis’s graphic novel memoire, co-written with Andrew Aydin and illustrated by Nate Powell. It is a critically acclaimed best-seller that also is the first graphic novel to win the prestigious National Book Award (given after the third volume came out). The first volume recounts Congressman Lewis’ youth in rural Alabama and provides an important into life for Black families in the 1940s and 1950s under Jim Crow and segregation laws. Lewis’ first-person narrative allows him to reminisce as he revisits his past, while the prose and art give us the feeling that we, too, are reliving this tumultuous time in American history along with him. Together, we are introduced to Martin Luther King, Jr.’s words and speeches, and we learn of the birth of the Nashville Student Movement and their non-violent struggle to eliminate segregation through their lunch counter sit-ins and their trips to prison and City Hall. We learn of Lewis’ first meeting with Dr. King and about the Supreme Court school desegregation decision of Brown v. The Board of Education, the case of Emmett Till in Money, Mississippi, of Rosa Parks and Jim Lawson and so many more. This trilogy does center around the amazing movement sparked by Martin Luther King Jr. but also around Congressman Lewis’ own impressive work in his community and far beyond.

Learn more about using March: Book One and Book Two in the classroom. 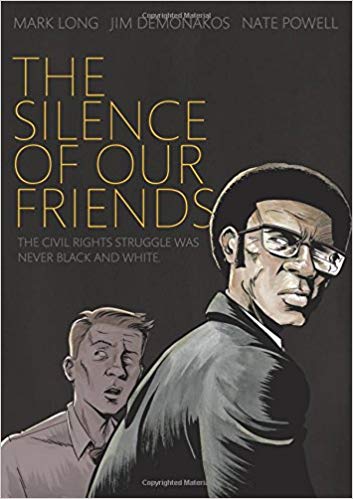 The Silence of Our Friends by Matt Long, Jim Demonakos, and Nate Powell

“In the End, we will remember not the words of our enemies, but the silence of our friends.” – Marting Luther King

The Silence of Our Friends is a semi-autobiographical story told from the perspective of Mark Long, as a boy. In their graphic novel, Long, Demonakos, and Powell clearly and powerfully relate the struggles of two families — one White, one Black — as they deal with violence, degradation, and humiliation in their respective fights for civil rights in the 1960s. They sensitively relate the daily issues facing the adults and their children while allowing readers to witness the social upheaval on a local level in Houston. It centers around civil rights incidents covered by Long’s father, a television reporter in Houston, Texas, in 1968, following the Texas Southern University student boycott after the Student Nonviolent Coordinating Committee (SNCC) was banned from campus. It ends with Dr. King’s assassination and the mourning of the larger Houston community as they marched in his memory that following Sunday.

In April 1967, the Student Nonviolent Coordinating Committee (SNCC) was banned from Texas Southern University’s campus. In reaction to the ban, TSU students boycotted classes and staged a sit-down protest on Wheeler Avenue, a street running through campus and the Third Ward that was known for racist whites who would cruise down Wheeler in cars and trucks, hurling obscenities (among other things) and often doing violence. That evening, the protest evolved into a police riot when an undercover officer was shot. Two hundred officers responded with massive rifle and machine gun fire and stormed a dormitory, arresting 489 Black students. All but five of the arrested students were released the next day. These five, who became known as the “TSU Five,” were charged with the officer’s murder. Only one of the five accused stood trial (in Victoria, Texas due to the extensive and heated publicity in Houston), and charges were dismissed after it was discovered that the officer was accidentally shot by another officer.

Learn more about using The Silence of Our Friends in the classroom. 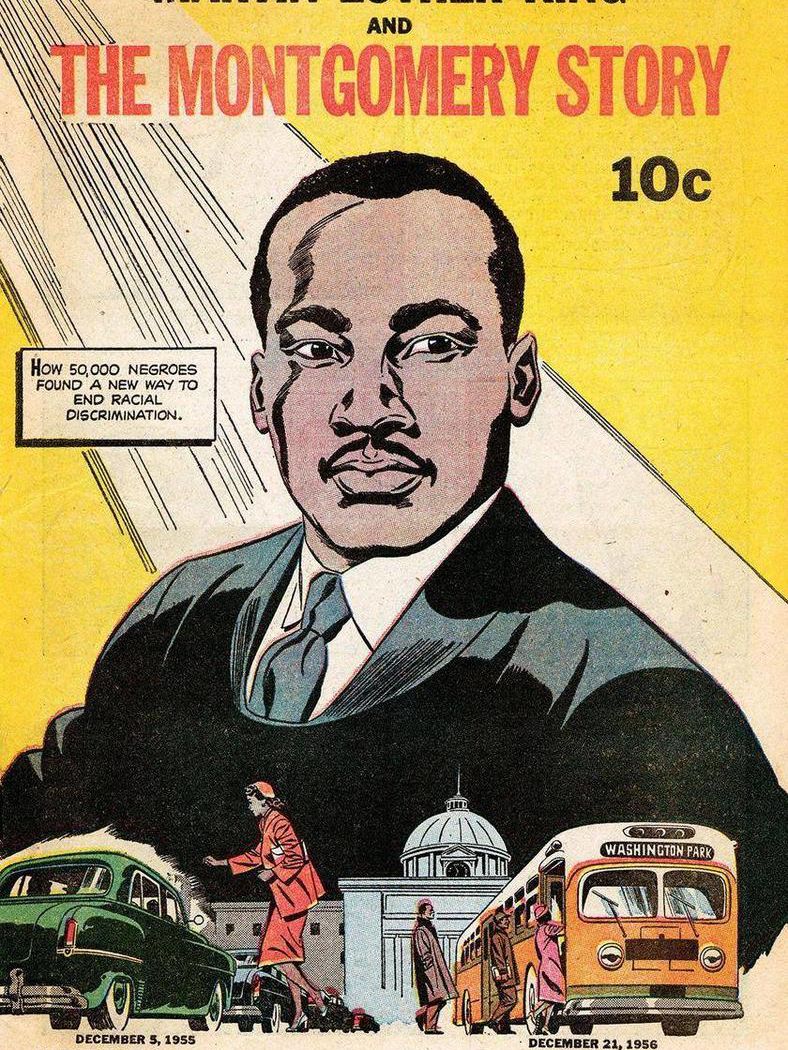 The comic that really started it all. This nonfiction comics could be used by teachers in conjunction with any of the above comics, or by itself. Until very recently this was close to being lost to history, but now thanks to Top Shelf the 16 page comic has been republished and can be purchased digitally. From comiXology,

Nearly sixty years after its creation, a little-known landmark of comic book history returns! This 16-page comic is a simple but revolutionary account of the 1955 Montgomery Bus Boycott, in which Rosa Parks, Dr. King, and 50,000 others used the power of nonviolence to battle segregation on city buses — and win.

First published in December 1957 by the Fellowship of Reconciliation, it went unnoticed by the mainstream comic book industry but spread like wildfire among civil rights groups, churches, and schools, helping to mobilize a generation to join the global fight for equality — nonviolently.

Personally endorsed by Martin Luther King, Jr. himself, over time this comic book has reached beyond his time and place to inspire activists in Latin America, South Africa, Vietnam, Egypt, and beyond… as well as inspiring MARCH, the new graphic novel trilogy by Congressman John Lewis, Andrew Aydin, and Nate Powell.

This new fully-authorized digital edition is published by the Fellowship of Reconciliation in partnership with Top Shelf Productions. All proceeds go to F.O.R.’s work promoting nonviolence around the world.