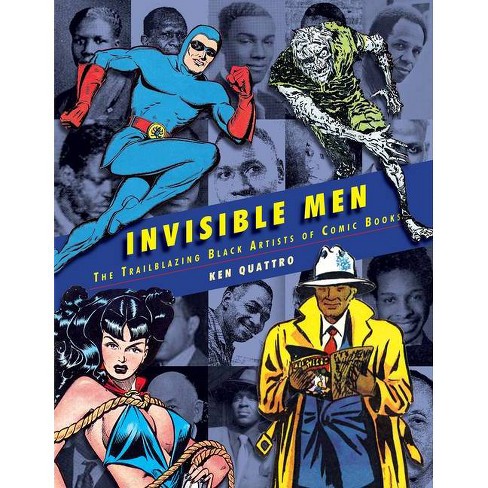 One of the books that graced my reading chair this past month was Ken Quattro’s Invisible Men: The Trailblazing Black Artists of Comic Books. The book was published in 2020 by Yoe Books, an imprint of IDW. It features a sampling of the Black artists who worked in comics during the Golden Age. Invisible Men is filled with examples of the struggle artists had overcoming censorship due to lack of access to the industry and representation.

Comics Detective Ken Quattro — he doesn’t like being called a historian — wrote the book after close to twenty years of research into the Black comic artists of the Golden Age. As he describes in an interview with POPXP, Quattro was originally researching the artist Matt Baker. Over and over, he would hear the narrative that Matt Baker was the only Black cartoonist of his time. He knew this couldn’t be the case, so he began digging deeper into the period conducting interviews with artists and scouring Black periodicals of the time. It was from this research that the rich history of artists began to emerge.

Invisible Men reveals the history that has been sitting right under our noses. Quattro opens his introduction with a quote from Ralph Ellison’s book Invisible Man,

“… I am invisible, understand, simply because people refuse to see me.”

Chapter by chapter, Quattro introduces us to the Black artists who contributed to the Golden Age of comics. Their identities were largely unknown, and the work they produced was centered on a white audience. The hefty book size features several pages of full-color scans of artwork from each artist as they’re discussed.

Quarto connects greater historical and social events with the impact they had on the comics industry. A new connection for me was his convincing chain of events; the defunding of the WPA and lack of white artists due to World War II created a demand for artists in the comics industry.

Censorship goes beyond removing comics from the shelves. Censorship also includes denying fair access to jobs and opportunities. This type of censorship is seen particularly in the denial of marginalized communities and can be enforced with identity censorship. Invisible Men gives us a glimpse at the history of Black artists fighting for access and representation.

Several artist profiles reveal how the studio, or comic shop system, was used to get around racist barriers to Black artists. Having the shop intercede between the artists and the publisher allowed the artists to have employment when they may not have had it otherwise. The cost — being invisible.

Also striking is the push for some of the artists to create their own space in the comics community through projects like All-Negro Comics and comics in Black periodicals like Elton Fax’s They’ll Never Die.

Invisible Men is a testament to the artists who fought for representation and fair access. Quattro has shone a light on a missing piece of comics Golden Age.

Far from finished, Quattro continues his work uncovering and fleshing out other Black artists on his blog Invisible Men.

Several of the artists featured in Quattro’s book were a part of the Profiles in Black Cartooning Series CBLDF ran with Black Nerd Problems in 2016. These include,

You can find Ken Quattro online at,

What I’m Reading is part of a series written by editor Jordan Smith. The goal of the series is to highlight books related to the comics community that resonate with the mission of the Comic Book Legal Defense Fund.