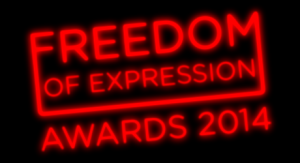 Cartoonists are some of the most influential and visible voices in political revolution, which frequently makes them the targets of censors and oppressive regimes. CBLDF has covered the struggles of several cartoonists over the past year, including Malaysian cartoonist Zunar, Palestitian cartoonist Fabi Abou Hassan, Singaporean cartoonist Leslie Chew, Toronto cartoonist Shahid Mahmood, Syrian cartoonist Ali Ferzat, Egyptian cartoonist Doaa el Adl, and many more.

The Index on Censorship includes artists among the categories for which you can nominate a free speech champion. From the official press release:

Advocate/Campaigner: Recognising those who have changed legislation, political climates or perceptions.

Artist: For those facing censorship or using their work to fight for freedom of expression.

Please enter your nominations here. The closing date for entries is Friday 6th December 2013. The winners will be presented with their awards at a ceremony in London in March 2014.

Drawing attention to international champions of free expression and their causes, the Awards mark Index on Censorship’s birthday and the ongoing struggle against censorship around the world.

← Report Illustrates International Crackdown on Online Expression
Neil Gaiman Gets In The Spirit of Giving! →