What a difference 60 years can make. On this day, in 1954, the Senate Judiciary Committee’s Subcommittee to Investigate Juvenile Delinquency was closing out a second day of hearings. These two days would prove a pivotal period in comics history, leading to decades of self-censorship that almost destroyed the industry.

In other words, I think something should be done to see that the children can’t get them. You see, if a father wants to go to a store and says, “I have a little boy of seven. He doesn’t know how to rape a girl; he doesn’t know how to rob a store. Please sell me one of the comic books,” let the man sell him one, but I don’t think the boy should be able to go see this rape on the cover and buy the comic book. I think from the public-health point of view something might be done now, Mr. Chairman… 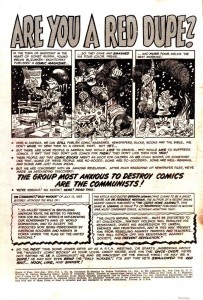 Comics didn’t lack a defense during the hearings: Bill Gaines, publisher for EC Comics spoke on behalf of the four-color, saddle stitch newspaper pamphlet that dominated the proceedings. However, at 32 years old and filled with righteous indignation (while also experiencing amphetamine withdrawal), Gaines was not the best spokesman. The young publisher unwisely chose to testify of his own volition and had the poor fortune to approach the stand with flagging energy due to multiple postponements of his testimony. He faced the hostile interrogation of senators, who had just respectfully heard Wertham’s indictment of comics and who were rankled by Gaines’s “Red Dupe” cartoon, which mocked those who would speak out against “naughty comic books.”

Although the cards were stacked against him, Gaines came out swinging. In the first moments of his testimony, he declared:

I was the first publisher in these United States to publish horror comics. I am responsible, I started them. Some may not like them. That is a matter of personal taste. It would be just as difficult to explain the harmless thrill of a horror story to a Dr. Wertham as it would be to explain the sublimity of love to a frigid old maid.

What are we afraid of? Are we afraid of our own children? Do we forget that they are citizens, too, and entitled to select what to read or do? Do we think our children are so evil, so simple minded, that it takes a story of murder to set them to murder, a story of robbery to set them to robbery? Jimmy Walker once remarked that he never knew a girl to be ruined by a book. Nobody has ever been ruined by a comic.

As has already been pointed out by previous testimony, a little healthy, normal child has never been made worse for reading comic magazines.  The basic personality of a child is established before he reaches the age of comic-book reading. I don’t believe anything that has ever been written can make a child overaggressive or delinquent.  The roots of such characteristics are much deeper. The truth is that delinquency is the product of real environment, in which the child lives and not of the fiction he reads.

There are many problems that reach our children today. They are tied up with insecurity. No pill can cure them. No law will legislate them out of being. The problems are economic and social and they are complex.  Our people need understanding; they need to have affection, decent homes, decent food.  Do the comics encourage delinquency? Dr. David Abrahamsen has written:  “Comic books do not lead into crime, although they have been widely blamed for it. I find comic books many times helpful for children in that through them they can get rid of many of their aggressions and harmful fantasies. I can never remember having seen one boy or girl who has committed a crime or who became neurotic or psychotic because he or she read comic books.”

Needless to say, Gaines’s stance did not sit well with the senators present, nor was it compatible with the public mood of the era (an anti-comics sentiment that was largely fostered by Wertham himself). Gaines unwisely continued to confront the lawmakers present, and Senator Kefauver badgered Gaines into several missteps: 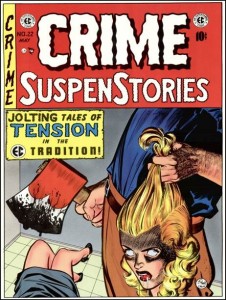 Bill Gaines: No, I wouldn’t say that there is any limit for the reason you outlined. My only limits are the bounds of good taste, what I consider good taste.

Beaser: Then you think a child cannot in any way, in any way, shape, or manner, be hurt by anything that a child reads or sees?

Gaines: I don’t believe so.

Beaser: There would be no limit actually to what you put in the magazines?

Gaines: Only within the bounds of good taste.

Beaser: Your own good taste and saleability?

Senator Estes Kefauver: Here is your May 22 issue. [Kefauver is mistakenly referring to Crime Suspenstories #22, cover date May.] This seems to be a man with a bloody axe holding a woman’s head up which has been severed from her body. Do you think that is in good taste?

Kefauver: You have blood coming out of her mouth.

Kefauver: Here is blood on the axe. I think most adults are shocked by that. 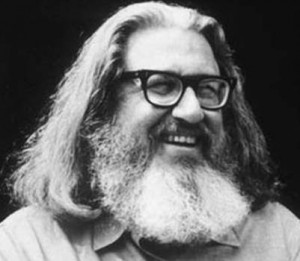 Gaines’s testimony ultimately added fuel to the anti-comics movement. After two days of Senate hearings and a deluge of bad press, compounded by an angry public and the threat of regulation by the government, the comics industry was backed into a corner. They responded by establishing the Comic Magazine Association of America, which instituted the Comics Code Authority, a censorship code that thoroughly sanitized the content of comics for years to come. Almost overnight, comics were diminished, suitable only for the youngest or dimmest of readers. Horror, crime, science fiction, romance, and other comics genres that appealed to older and more sophisticated readers were wiped out for a generation.

As for Gaines himself, the hearings changed his course forever: Gaines’ deep resentment of Wertham’s assertions and the impact of the Senate hearings colored his attitudes towards publishing. To escape the regulation of the Comics Code (and the dwindling comics sales he saw after the code was enacted), Gaines founded Mad magazine, encouraging cartoonists to lampoon authority. The magazine became a powerful influence on cartoonists and activists in the years to come.

Today, the Comics Code is no more. You’d think that comics could proliferate safely, and our freedom to read would be assured, but CBLDF continues to exist for a reason. If comics hadn’t been attacked so vigorously in 1954, would CBLDF still need to fight on their behalf? While we’re unlikely to see two days of anti-comics hearings take place on the Senate floor today, comics are still targeted by would-be censors. Until recently, comics were generally considered a second-class literature, a legacy of Wertham and Kefauver’s 1954 crusade against them. We can only hope that as this crusade fades with time, CBLDF won’t need to continue defending comics 60 years from now.

For an in depth examination of the history of comics censorship, check out the following series from CBLDF:

History of Comics Censorship, Part 1: From comic book burnings to the arrival of the Comics Code.

History of Comics Censorship, Part 2: From Mad Magazine and the birth of Marvel Comics through the Underground Comix era, the Zap #4 obscenity trial, the revision of the Comics Code and the arrival of the obscenity test.

History of Comics Censorship, Part 3: From the birth of the comics specialty market to the establishment of the Comic Book Legal Defense Fund.

History of Comics Censorship, Part 4: Legal attacks on artists, including Paul Mavrides, Mike Diana, and the creators of DC Comics’ Jonah Hex: Rider of the Worm & Such.

History of Comics Censorship, Part 5: Legal attacks on retailers and publishers, including Planet Comics’ obscenity bust for horror comics; Texas’ prosecution of Jesus Castillo for manga; Top Shelf’s dispute with U.S. Customs, and Georgia’s battle with a retailer over a depiction of Picasso.

History of Comics Censorship, Part 6: Library bans and prosecutions of readers over manga.