As the debate rages on in South Carolina over a proposal that punitively cuts the budgets of two colleges that had incorporated LGBT-themed books — including Alison Bechdel’s Fun Home — into elective reading programs rages, writers are taking a stand. The Hub City Writers Project in Spartanburg, South Carolina, launched Writers Speaking Out Loud, an initiative that encourages writers to protest the budget cuts.

On the WSOL blog, writers are encouraged to post a photo of themselves in a Writers Speak Out t-shirts, sharing a short statement about why they oppose the budget cuts. The WSOL campaign has gained the attention of acclaimed writers from around the world, many of them Pulitzer and National Book Award winners. Dennis Lehane (Mystic River and Gone Baby Gone), Richard Ford (The Sportswriter, Independence Day), Ann Patchett (State of Wonder, Bel Canto), and Junot Diaz (The Brief Wonderous Life of Oscar Wao) are just a few of the writers who’ve shown support. 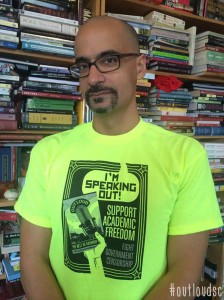 In his statement of support, Diaz attacks censorship and advocates for academic freedom:

Why am I speaking out: Because censorship is the primal enemy of the artist and of a democratic society. Because our so-called leaders should be funding our university system, not censoring it. Because without LGBTQ artists what hope do any of us have? And because the just nation we deserve is not the one the politicians are trying to twist into being in South Carolina.

Lehane is blunt in his assessment of the South Carolina legislature’s actions:

Only morons and mean children are afraid of free speech and fairness to all.

“My participation is rooted in our county’s history with banned books and education,” said National Book Award–nominated poet Terrance Hayes. “While the debate over banned books usually seems to happen just outside the gates of government, it takes on a new danger and urgency when legislators get involved. Their actions cause voices to be silenced both inside and outside the books. That’s un-American.” Hayes added that he hopes the Hub City movement “becomes a corrective to narrow governance and that it rekindles our age-old conversations about the role of art in society.”

The budget cuts specifically affect two schools: College of Charleston, which had used Alison Bechdel’s Fun Home in a voluntary summer reading program for incoming freshman, and the University of South Carolina Upstate, which had used Out Loud: The Best of Rainbow Radio for a similar program. Neither school required students to read the books. If the budget passes, both schools will see budget cuts exactly equivalent to what they were given for the programs.

A vote on the budget is forthcoming. Senators who support the budget cuts have resorted to taking panels out of context to support their arguments. From Seanna Adcox via the Associated Press:

Supporters of the amendment described the book “Fun Home: A Family Tragicomic,” assigned in Charleston, as pornographic. Much of the debate centered on a single drawing in the illustrated book that depicted two women having sex. Senators seeking the cuts accused the colleges of forcing an agenda on teenagers. The book describes the author’s childhood with a closeted gay father, who commits suicide, and her own coming out as a lesbian.

One senator even compared Fun Home to Adolf Hilter:

Some senators have tried to reason with the opposition. Adcox reports:

“Very few people recognize this book as pornography. Maybe in here. Maybe a bunch of old guys, but that’s not how the world turns these days,” said Sen Brad Hutto, D-Orangeburg. “You’re saying we’re going to punish a university for daring to expose an adult — these are adults, this is not kindergarten — to a subject matter you find uncomfortable that they do not. This body has a hang-up on sexuality in general and homosexuality in particular.”

Sen. Marlon Kimpson, D-Charleston, said he attended the sold-out play based on the book, which the author brought to Charleston last month, and found nothing offensive.

“We are micromanaging what our colleges and universities are supposed to do and that is put books on a book list that will challenge the reader,” he said, adding that cutting funds because of the universities’ book choices “sends a dangerous message.”

“I don’t care how much funding it is. Where are all the freedom fighters? This is academic freedom.”

We’ll soon know whether the Senate is going to keep the budget cuts. Hopefully, they Senate will heed Richard Ford’s statement of support on WSOL:

← IRONY ALERT: Would-be Censor Arrested at School Board Meeting, Claims Violation of His First Amendment Rights
Tennessee School Board Bans The Curious Incident of the Dog in the Night-Time →