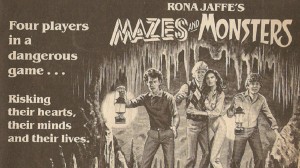 Former psychiatrist and founding member of the National Coalition on TV Violence, Thomas Radecki, may have famously led a nationwide battle against violence in comics and RPGs in the 1980s as a means to protect America’s youth, but a Clarion, Pennsylvania court recently sentenced Radecki to 11 to 22 years in prison for overprescribing anti-addiction and anti-anxiety medication to his patients as well as soliciting sex from female patients in exchange for drugs.

While Radecki’s sentence has nothing to do with his drive to censor comics and games, it has brought him back into the limelight, so we decided to take a look at the man, who essentially assumed the anti-comics mantle of the infamous 1950s child psychologist Dr. Fredric Wertham, and the lasting impact he had on the industry.

In 1954, Dr. Fredric Wertham published his book Seduction of the Innocent, which became the cornerstone of a large-scale Senate Subcommittee Hearing to investigate the alleged link between comic books and the rise in juvenile delinquency. From case studies to public speeches, Wertham wooed a fearing public and stoked the fires of a budding morality police. His now proven fabricated research would be included in newspapers and television broadcasts across America, and in 1954 would help in the establishment of The Comics Code Authority and Comics Code. Radecki would follow in the good doctor’s footsteps, attempting to show comics hadn’t really changed and, along with new forms of media, they were still the root cause of youth violence in America.

In 1985, Radecki began his crusade against media violence when he made the claim that RPG games like Dungeons & Dragons drove young gamers to murder. A board member of the Parents Music Resource Center and research director at the International Coalition Against Violent Entertainment and Doctors & Lawyers for a Drug Free Youth, Radecki used his status as a doctor to convince the masses that violence depicted in any form of media led to violence in children. In a famous excerpt from a press release on the effects of D&D on children, Radecki notes:

The evidence in these cases is really quite impressive. There is no doubt in my mind that the game Dungeons and Dragons is causing young men to kill themselves and others. The game is one of non-stop combat and violence. Although I am sure that the people at TSR mean no harm, that is exactly what their games are causing. Based on player interviews and game materials, it is clear to me that this game is desensitizing players to violence, and, causing an increased tendency to violent behavior.

Radecki and others fought their battle through the production of anti-RPG comics like Dark Dungeons by evangelical Christian Jack Chick (producer of those tiny booklets about everything that’s supposedly evil) and in films like Mazes and Monsters, which hysterically touted to the American public the dangers of games like Dungeons and Dragons. Called to the stand as an “expert” on 12 different criminal cases involving RPGs, Radecki claimed to have reviewed over a hundred individual cases in which gamers expressed violent tendencies after participating in the fantasy RPG. Although Radecki could never make his claims stick in a court of law, the political rhetoric and social discourse used by Radecki sounded a lot like another doctor from a few decades back, and despite his lack of success convincing the courts, he was capable of stirring up the concerned public and would-be censors.

In 1989, Radecki appeared on The Larry King Show along with CBLDF founder and Kitchen Sink Press publisher Denis Kitchen (and a call-in comment from comics creator Frank Miller) to discuss the “evil” effects of comics. With the rise in popularity of titles like Watchmen and the Dark Knight Returns series—both of which have been the target of censors since their initial publication—Radecki claimed comics taught kids to hate and accept torture and extreme displays of violence as a means to solving problems. According to Radecki, comics represent “some of the most violent entertainment out there” and the “most violent section of the bookstore.” Radecki further argued that based on market research, a marked increase in violence in the United States over a decade period could trace its roots in part to comic books and violence in media.

Interestingly, Radecki admits to not having read comics as a child due to Frederic Wertham. He tells Larry King:

Actually, my father was a physician and he must have been influenced by the congressional hearings back then and the psychiatrist Fred Wertham was concerned about the violence. He told me we couldn’t read the superhero comics that were so violent back in the ‘50s, as they are today.

King proceeds to share isolated, out-of-context panels from various comic books, not unlike the comic book covers that were put on display during the 1954 Senate Subcommittee Hearings, and Radecki goes on to claim that he finds “50, 100, 150 acts of violence per typical comic book.” Miller and Kitchen both point out that the comics that Radecki is targeting are for adult audiences and likely to hold little interest for younger readers.

Unlike Dr. Wertham, Radecki’s own crusade against comics wouldn’t directly lead to large scale changes like the establishment of a code or series of regulations, but his propagation of rhetoric against the medium would feed pervasive misconceptions about the medium and lay the seeds for others to strike out against other forms of entertainment, including rap music and video games. Radecki’s crusade helped foster a fear in the American public that can still be seen today in some of the attempts to censor comics and to regulate violent speech.