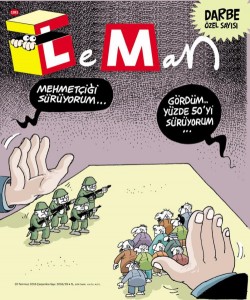 Turkey’s President Recep Tayyip Erdoğan has spent years trying to crack down on free expression in the country. A failed July coup attempt heralded even more oppression, but much like previous attempts to stifle dissent, Turkey’s satirists are still finding ways to express themselves.

Jonathan Guyer of the Institute of Current World Affairs was in Turkey for a month, investigating the situation for cartoonists. He left just two days before the coup attempt. Guyer recently discussed his dire findings with PRI:

“Every cartoonist I interviewed in Turkey told me that 2016, irrespective of the recent coup and crackdown, has been the most difficult year for cartoonists on record.” Guyer says about 1,500 people, including cartoonists, celebrities and journalists, are under investigation for insulting the president.

“The legal assault on cartoonists in Turkey has really been unprecedented over the past few years under Erdogan.” One cartoonist, Musa Kart, was sued by Erdogan for a 2004 drawing that portrayed the Turkish president as a kitten and for another cartoon that portrayed him as a bank robber. “[Kart] told me that’s there’s no serious journalist or cartoonist who doesn’t have a case against him or her in the country.”

The already dire situation for freedom of expression and other basic human rights in Turkey sharply worsened after Turkey’s failed military coup against President Erdoğan’s government. In past few weeks, tens of thousands of people have been arrested on spurious charges, nearly 60,000 civil service workers and all public university deans have lost their jobs, and all professors have been banned from traveling or working abroad.

Unsurprisingly, the crackdown deeply affected the press: dozens of journalists had their credentials revoked, and the satirical magazine LeMan was prevented from printing a special post-coup edition with a cover cartoon suggesting that the government deliberately pitted civilians against the military plotters. The editor of LeMan told the BBC he feels it’s only a matter of time until his staff becomes the target of a Charlie Hebdo-style attack by Erdoğan’s supporters.

Guyre’s interview with PRI is embedded below. You can also read a summary here.

← Banned in China: Suicide Squad Unlikely to See Release Due to Violence
Exiled Cartoonist: “I’m From the Internet” →