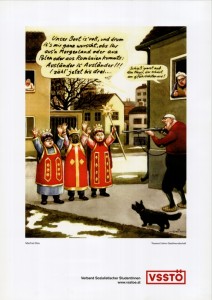 An anti-racist cartoon by Austrian artist Manfred Deix has fallen prey to Facebook’s arbitrary enforcement of their content standards reports Variety. Over the weekend, the cartoon was blocked from the Manfred DEIX Forever Facebook page, and several users who took it upon themselves to repost the image were also blocked from the social media site.

Our boat is full and I don’t give a fuck whether you’re from the East, Poland, or Romania, foreigner is foreigner! Now, count to three…

One of the children is Black, and an elderly female bystander eggs on the confrontation, using a racial slur to note that the Black boy looks like a ghost.

The cartoon was used in a poster for the Socialist Students of Austria (Verband Sozialistischer StudentInnen Österreichs, or VSStÖ), an orgnaization that formed in 1893 to support unions and young workers. The organization was banned during World War II, and its current incarnation embraces Marxist values to advocate for open access to education, gender and social equality, peace, and anti-globalization of corporations.

Deix, something of an artistic prodigy who once lost a children’s art contest because, at 11, his work resembled that of a grown adult, contributed to various publications throughout his career, including Stern, Der Spiegel, and Playboy. He was himself politically active, in particular advocating for animal rights.

As of this writing, the DEIX Facebook appears to have been able to add the image to its photo gallery, but admins have resorted to sharing a link to the image on the post thread. At least one commenter on the post has successfully shared the image, but others have reportedly been blocked.

In most cases, the images were restored, but Facebook’s uneven enforcement continues to be of concern. Facebook is within their rights to regulate the content on their platform, but in this case, the ban of Deix’s anti-racist cartoon is at best arbitrary as the image does not appear to violate any of Facebook’s community standards.