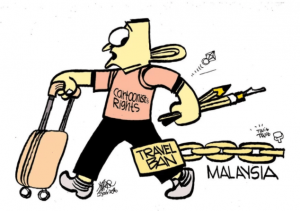 In a judicial hearing yesterday, Malaysian cartoonist Zunar requested that the country’s highest court consider his challenge to a punitive order that prevents him from traveling abroad. The personal travel ban was imposed last year by Inspector-General of Police Khalid Abu Bakar until such time as the nine charges of sedition against the cartoonist are resolved.

Zunar and his lawyer Gopal Sri Ram are disputing a 1979 Federal Court precedent, arguing that the court did not actually have jurisdiction to rule in that case. The Federal Court is Malaysia’s top court and the 1979 decision held that the freedom to travel abroad is not an inherent right, but Zunar’s legal team is effectively asking the justices to reconsider and set a new precedent.

In an interview with Fa Abdul of news site Malaysiakini before the hearing, Zunar talked about his commitment to using his art to try to bring about positive change in the country. “Talent is a responsibility, Fa, not a gift,” he explained. “Every artist has a responsibility to use their talent for the benefit of the people.”

He went on to deplore the state of discourse in Malaysian media, which he says “has become part of the conspiracy to stop people from thinking and to stay uninformed.” Referring to a popular TV talk show about Islam, he pointed out that the guests always seem to be traditionalists–not progressive Muslims like himself.

For example, there are many illustrators producing cartoons for [ruling party] UMNO. That’s perfectly okay by me. They even have many publications. I have no problem with that either.

But why am I not given the same right? If people want to see my cartoons, why stop them?

Sadly, Prime Minister Najib Razak’s government lacks the confidence to allow such free thought and discourse. Instead, most of Zunar’s collected editions of cartoons are officially banned in the country, and he is facing one count of sedition per tweet that he sent in February 2015 following the sentencing of opposition leader Anwar Ibrahim on a trumped-up sodomy charge. If convicted on all counts, Zunar could receive up to 43 years in prison.

Nevertheless, through all his travails Zunar remains determined both to use his talent as he believes it was intended, and to inspire his fellow Malaysians to hold their government to account rather than accepting censorship and oppression. Check out his full interview with Abdul here at Malaysiakini.