“As a kid, the first issue of Love and Rockets I saw astonished me not just with its visual and storytelling mastery, but with the worlds it focused on – characters of every shape and background, from women selling babosas barefooted to sexy, smart mechanic girlfriends. I’d never experienced anything like it, and that’s because there is nothing else like it.” Gail Simone, (Birds of Prey, Batgirl)

“I was an enormous fan. I still am. I don’t really understand why the material of Love and Rockets isn’t widely regarded as one of the finest pieces of fiction of the last 35 years. Because it is.” Neil Gaiman, (Sandman, American Gods)

Palomar by Gilbert Hernandez is named for the fictional town in Latin America where all the stories take place. Also known as Heartbreak Soup it follows the tales of several members of the fictional town as they weave together and fall apart over the course of twenty years. It is included in Time magazine’s Best Comics of 2003 list, and in 2005 was one of Time‘s 100 best graphic novels of all time.

When Catrenna Lopez found objectionable material in Palomar after her 14-year-old son checked it out of the Rio Rancho High School library, she didn’t simply file a challenge with the school — she took her objections to the local media. A quick Google search would have turned up the accolades for the book and its literary value, but local news outlet KOAT didn’t comes close to a fair an accurate report, declaring that “we can’t show you any of the images because they’re too sexual and very graphic” and quoting Lopez’s claims that she found “child pornography pictures and child abuse pictures.” Of further concern were indications in the KOAT report that unnamed individuals in the school administration support Lopez’s claims that the book is “clearly inappropriate.” 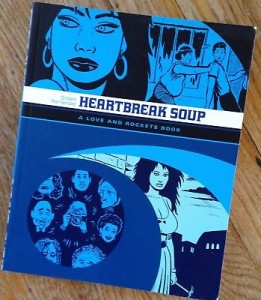 CBLDF took immediate action to help defend the book, taking the lead with frequent partners Kids’ Right to Read Project in sending a letter to Superintendent V. Sue Cleveland to protest the allegations against Palomar. The letter argued that one parent’s objections cannot be allowed to determine the rights of other students to enjoy Palomar or any other literary work. And the letter urged the school district to adhere to its own guidelines, which state that reviews to challenged materials be treated “objectively, unemotionally, and as a routine matter.” The Rio Rancho review committee agreed. By a 5-3 vote, the committee voted to retain the book.

If you’d like to add Palomar to your curriculum, check out CBLDF’s

• Adding Palomar to Your Classroom or Library

Or snag a digital copy of the first volume of Palomar: Heartbreak Soup, from the Forbidden Books Humble Bundle! Don’t wait, your chance to pay what you want for a huge selection of frequently banned and challenged books and comics is almost over!

← One of the Most Influential Banned Comics of All Time : Barefoot Gen
CBLDF New York Comic Con 2018 Party! →