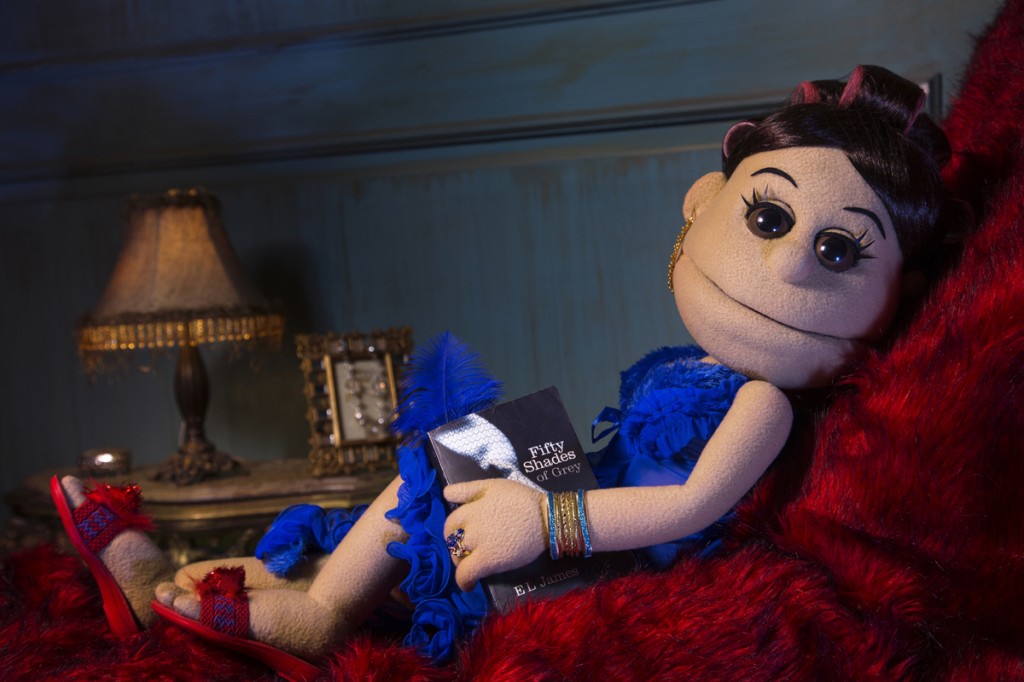 Abla Fahita relaxes with one of the Top Ten Frequently Challenged Books of 2015.

A wildly popular satirical puppet who appears on Egyptian television is being called into court on June 26, accused of “violating public morality” with her bawdy jokes. The case against Abla Fahita (Aunt Fajita) was brought by lawyer Samir Sabry, who is well-known for introducing frivolous lawsuits.

Abla Fahita dispenses humorous political commentary on her weekly TV show on CBC, a satellite channel, and has garnered more than half a million Twitter followers. Despite her obvious popularity with Egyptians, Sabry claims that her ribald humor “runs contrary to the values and ethics of Egypt.” The charge of “violating public morality” is the same one that recently landed novelist Ahmed Naji in prison for two years. Abla Fahita’s creator is anonymous, and it is unclear whether they will be forced to reveal their identity due to the court case.

It seems likely that Sabry’s claims about morality are actually cover for the fact that he simply disagrees with the puppet’s politics. Abla Fahita frequently criticizes officials in President Abdel-Fatteh al-Sisi’s government. Sabry has recently said that he thinks “public figures…deserve more respect,” and that the TV show is not a “good example of free speech or creativity.”

In a recent episode the puppet complained that “everything has become a taboo in Egypt nowadays and censorship has reached an alarming point.” She then proceeded to list several dissidents and creatives who have recently been arrested, including Naji and the poet Fatima Naoot, who was sentenced to three years in prison for “contempt of religion” after she criticized the Muslim ritual of animal sacrifices to mark Eid al-Adha. (Naoot is Muslim herself.)

Incredibly enough, this is not the first time Abla Fahita has come under official scrutiny. In 2014 a counter-revolutionary activist accused her of sending coded messages to the banned Muslim Brotherhood via a cell phone commercial, and government prosecutors investigated. Nothing ever came of the charges, of course, and many Egyptians cringed at the absurd spectacle of their government probing a puppet at the behest of a conspiracy theorist. Ziad Akl, a political analyst at Al Ahram Center for Political and Strategic Studies, correctly foresaw in a Washington Post article that the attack on satire was a bad sign for Egyptian free expression in general: “We are laughing about the puppet now, but replace the puppet with anything else — another symbol, another figure — and the media can manipulate and do anything with it.”