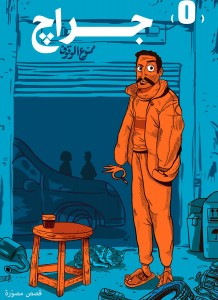 The independent comics scene in Egypt is flourishing as more and more young adults find freedom of expression through the power of the pen. This is definitely the case for Cairo-based twin cartoonists Mohamed and Haitham El-Seht, who recently sat down with designboom to discuss how comics have empowered them to speak out about social issues in their country.

Since a young age, identical twin brothers Mohamed and Haitham El-Seht (best known as “Twins Cartoon”) loved to read and make comics. Encouraged by their parents to pursue the arts, the brothers attended Minya University for fine arts, from which they graduated in 2008, and were quickly employed by many notable Arabian and European cartoon and advertising companies. “Daily life in Egypt is so crowded with people and lively scenes which make for a visual feeding for any artist,” the brothers told designboom. “This alone was motivation for us to become comic artists because there were so many stories we could tell through drawing.”

Beyond just creating their own works, though, Twins Cartoon fostered a desire to share their passion for comics with others as well as create a space for budding cartoonists to have their work published. In 2014, Twins Cartoons founded the “Painters Planet” (Kawkab El Rasameen) project which hosted creative workshops and events a fledgling indie comics scene both domestically in Egypt and abroad. And in 2015, they launched Garage comics gagazine in collaboration with the Cairo Comix International Festival, which has become a well-known and established comix magazine and collective in Egypt.

Twins Cartoon has dedicated themselves for almost ten years to fostering creativity in Egypt, but protecting those creative spaces isn’t easy. “We can say that freedom in Egypt is so rare, it’s almost not even available,” admit Twins Cartoon, adding:

Art is a powerful tool for expression, but sure authorities don’t like it because it exposes them against their people. The revolution gave artists a new spirit for expression, and they thought that it was time freely say what they feel. But many have, and continue to be, arrested and put in jail. The pencil is a tool which all dictators hate. 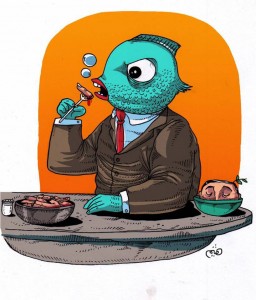 From authors like Ahmed Naji, who was sentenced earlier this year to two years in prison for “violating public modesty” with an excerpt from his book, to cartoonist Makhlouf, who was arrested for taking part in a planned protest against the Egyptian government, the increase in aggression against free speech by officials in Egypt has grown to alarming levels.

Despite the obstacles, though, artists like Twins Cartoon recognize the importance of their work as a vehicle to speak out about social and political issues. “Politics is a part of our daily life which we can’t ignore,” states Twins Cartoon.

The Egyptian revolution had a big effect on the comic industry, which saw a lot of artistic development as a means of expression, not just in comics but also graffiti, theatre etc.…  Political reference in our point of view is not just about authority, or to take down a bad president, but it also about social lifestyle.

Whether it be creating a comics collective or independent comics magazine, for the brothers, cartoons represent a way for everyone to speak out about what is happening in society and as such should be encouraged. They remind us that “art reflects the deep soul of society.” Most importantly, “It establishes effective community participation among artists talent.”

Click here to read the full interview with Twins Comics!