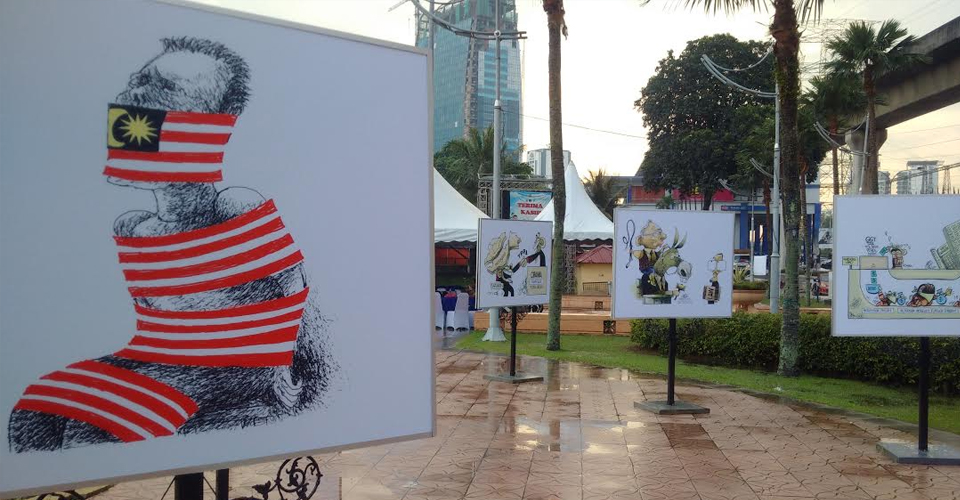 In anticipation of the next step in his sedition trial, Malaysian political cartoonist Zunar has launched a daring open-air exhibition of his works in a busy urban area near Kuala Lumpur. Although he risks being censored or even arrested again, Zunar said he wanted his work to reach more of the general public rather than just art aficionados who would choose to attend an indoor exhibit.

The exhibition in Petaling Jaya, called Cartoons for Rakyat (Cartoons for the People), began last Friday and is slated to run through Saturday. Zunar chose 20 of his favorite panels and had them printed large enough for display in a park across from a popular shopping center. The exhibition was inspired by a similar one organized by Cartooning for Peace along the shore of Lake Geneva in Switzerland after Zunar and East African cartoonist Gado shared the organization’s annual prize earlier this year.

Zunar timed the exhibition to coincide with the next hearing in his sedition case, set for tomorrow in Kuala Lumpur. He is charged with nine counts of sedition which could net up to 43 years in prison. The charges stem from statements that Zunar made on Twitter last February following the sentencing of opposition leader Anwar Ibrahim on a trumped-up sodomy charge. The cartoonist hinted that the judiciary in that trial had been subject to political pressure or bribery, observing that “the lackeys in black robes are proud of their sentences. The reward from political masters must be plenty.” He then exchanged Twitter barbs — and a cartoon — with Inspector-General of Police Khalid Abu Bakar as officers were en route to arrest him.

Speaking to Malysian news site Berita Daily, Zunar said he’s well aware that the outdoor exhibition could lead to further trouble, but “all I can say is that I am ready. Even if they want to cuff me again. Am I scared? Yes I am. But my responsibility to the country is far bigger than my fear.”

Currently, Zunar and two other defendants are challenging the country’s Sedition Act, a holdover from the British colonial era which predates Malaysia’s constitution. Zunar’s trial was originally set to begin on May 20, 2015, but has now been delayed multiple times while courts await decisions on various Sedition Act challenges. While we continue to wait for action on his case, please take a moment to sign the International Federation of Journalists’ petition calling on the government to drop the charges. Cartoonists Rights Network International also provides a convenient form letter to send to Malaysian embassies.