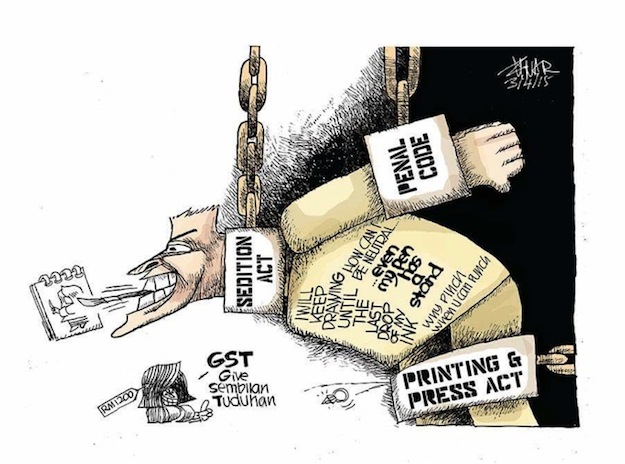 Even as he faces up to 43 years in prison on sedition charges, political cartoonist Zunar is not holding back from calling out the Malaysian government’s hypocrisy and retaliatory blacklisting of performers who dare to speak up for regular citizens.

Given that his exhibition of cartoons skewering Prime Minister Najib Razak and the ruling party UMNO was shut down last year through coordinated intimidation tactics, Zunar pointedly and publicly asked this week why UMNO itself is hosting its own exhibition of cartoons against the opposition party DAP. After the shutdown last year, a member of UMNO’s youth wing filed a legal complaint against Zunar for “intentionally humiliating a person”–the Prime Minister.

Since UMNO’s exhibition naturally features caricatures of DAP leaders, Zunar inquired in a press statement why he was harassed and arrested for “a similiar exhibition with the opposite subject.” He also invoked the case of Fahmi Reza, the street artist and graphic designer who is currently on trial for his clown-face caricature of Najib.

The following day, Zunar again spoke up in defense of performance artists (called artistes in Malaysia) who are blacklisted if they fail to toe the government line. In this case he was responding to a backlash against pop star Sheila Majid, who posted on Twitter about regular Malaysians’ frustration with the high cost of living and “being squeezed over debts we did not create.”

After an aide to Najib accused the singer of acting as “a tool of the opposition,” Zunar expressed his concern that she and other artistes who have spoken up in recent days–a TV presenter and an actress–would be blacklisted and prevented from performing in public. “They are speaking up about what ordinary folk are already thinking,” he said. “These are bread-and-butter issues. You cannot punish artistes just for expressing their views.”

Meanwhile, Zunar himself is still facing nine counts of sedition, which stem from statements that he made on Twitter in February 2015 following the sentencing of opposition leader Anwar Ibrahim on a trumped-up sodomy charge. The cartoonist hinted that the judiciary in that trial had been subject to political pressure or bribery, observing that “the lackeys in black robes are proud of their sentences. The reward from political masters must be plenty.” He then exchanged Twitter barbs — and a cartoon — with Abu Bakar as officers were en route to arrest him.