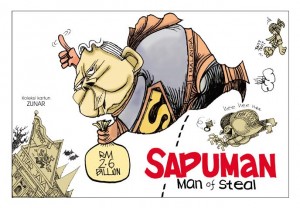 Malaysian cartoonist Zunar was back in court this week, filing a legal challenge to the government’s ban on his latest book Sapuman: The Man of Steal. The ban was imposed last year after the cartoons critical of Prime Minister Najib Razak were “deemed prejudicial to public order,” but Zunar was not immediately informed of it.

Nine of Zunar’s books are currently banned in Malaysia, but a court did overturn the ban of two more in 2014. Sapuman, a play on the Malay word ‘sapu’ meaning to grab or snatch, takes aim at the corruption in Najib’s government. Most notably, the Prime Minister is implicated in the 1MDB Scandal, in which $700 million from a government investment fund was diverted into his personal bank account.

Meanwhile, the High Court of Kuala Lumpur also set a date in April to hear Zunar’s lawsuit for wrongful arrest and property seizure at his Tea With Zunar fundraiser and book signing in December 2016. That event ended with a police raid and the arrests of Zunar, two of his assistants and two fans including Member of Parliament Jimmy Wong. Police also seized about $6,700 worth of books that were for sale at the fundraiser.

Apart from these latest legal proceedings, of course, Zunar is also still awaiting trial on nine counts of sedition which could land him in prison for up to 43 years if convicted. The charges stem from statements that he made on Twitter in February 2015 following the sentencing of opposition leader Anwar Ibrahim on a trumped-up sodomy charge. The cartoonist hinted that the judiciary in that trial had been subject to political pressure or bribery, observing that “the lackeys in black robes are proud of their sentences. The reward from political masters must be plenty.” He then exchanged Twitter barbs — and a cartoon — with Abu Bakar as officers were en route to arrest him.