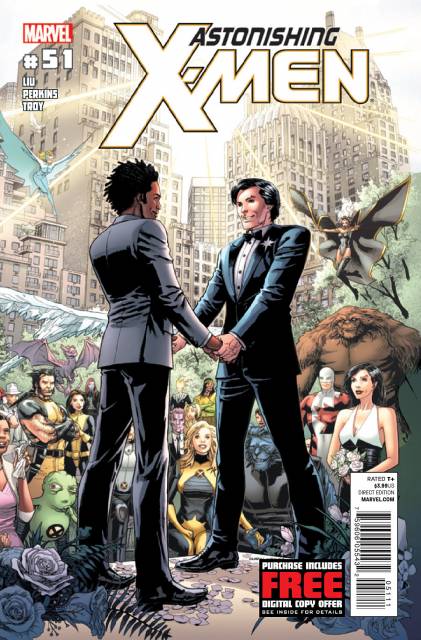 Everyone knows by now that the wedding of gay Archie character Kevin Keller is too hot for Singapore’s Media Development Authority, which recently banned retailers from importing Archie: The Married Life 3 because it was “not in line with social norms.” But what about the other big same-sex wedding in comics, that of Northstar and Kyle Jinadu in Astonishing X-Men 51? That issue passes scrutiny, the government agency says–because there is a character who objects to the wedding.

In Astonishing X-Men, alien bodyguard Warbird refuses to attend Northstar’s wedding, saying she “doesn’t recognize the validity of the ceremony vows.” In the MDA’s view, that objection was enough to provide “a balanced treatment on the issue of gay marriage,” so Issue 51 can be imported and sold in Singapore. It did however receive the designation “Unsuitable for the Young” so it must be shrink-wrapped and have a warning label applied in stores.

It is probably worth noting here that Warbird’s objection was not enough to appease the U.S. group One Million Moms, who pursued a fruitless boycott against Marvel when the issue was published in 2012. In contrast, at least the MDA actually read the book instead of simply reacting to the cover! Nevertheless, the absurd requirement to include dissenting fictional characters in order to avoid censorship places an unacceptable burden on creators’ freedom of expression.